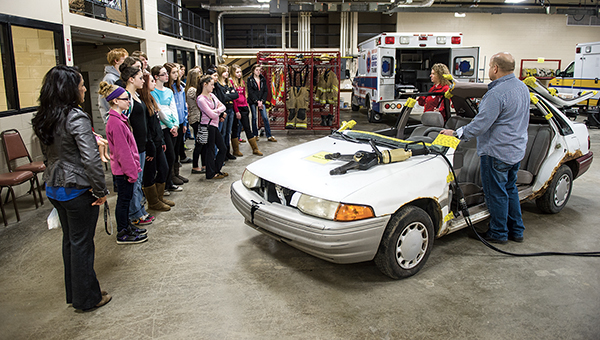 The students, broken up in small groups, stood in classrooms as college faculty taught them about careers such as radiology, carpentry, criminal justice, fire and rescue and more. One of the highlights for the groups was the opportunity to stand in the healthcare simulation center. 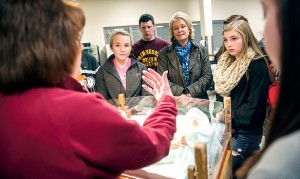 Realistic mannequins, which imitate breathing, filled the simulation center. Students gathered around a baby hooked up to a tablet in which faculty could control the baby’s actions, such as making it cry. The students’ “oohs” and “aahs” filled the room.

Taking students into the classrooms and teaching them about real-life situations is important for eighth-graders about to enter high school, Zellar said.

“We want to plant the seeds,” she said.

Zellar said that by 2018, approximately 70 percent of the jobs in Minnesota will require some form of post-secondary education. Over half of those jobs could require two years or less at a technical college, she said.

Joselyn Huerta, an eighth-grader at Ellis Middle School, found the day to be useful for preparation. She has ambitions to be a lawyer.

“I like helping people,” Joselyn said. She likes giving advice, and she wants to apply that in her career.

“It does sound fun,” Rosalinda said. She and her classmates stood in a classroom filled with mannequins and a punching bag to teach students about criminal justice.

“It’s been pretty fun,” she said of the day.

Students were also able to stand in on a simulation that enacted a scenario a police officer would encounter, such as a domestic argument. Students stood in front of a screen watching and thinking about what they would do in that situation.

Eighth-grader Kayli Gonzalez said the day helped her in preparing for her future as a possible police officer. She wants to have a career in which she can help people.

“It’s important to have real-life situations,” Zellar said. “How else would you prepare?” she asked the students.

Zellar said these collaborations between schools and the college have been increasing. Students as early as fourth grade have made these college visits, she said.

She hopes getting students on campus will help them determine what they need to do to get into college. Ultimately, she hopes preparing young students will help set them apart and make a difference in their lives.