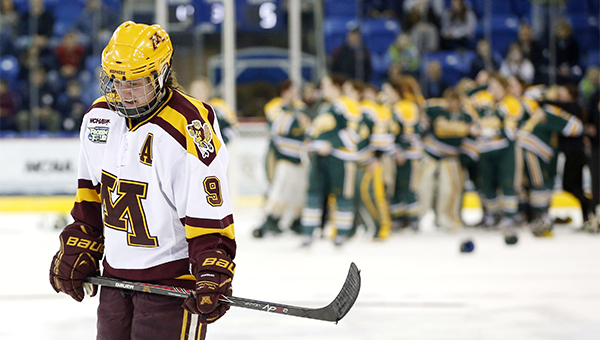 Shannon MacAulay scored on a breakaway with 4:16 left in the third to help give Clarkson a 5-4 victory on Sunday.

The Golden Knights are the first team aside from Wisconsin, Minnesota Duluth or Minnesota to win the national title in women’s hockey.

“I think we deserved this,” MacAulay said. “We worked hard all year for it.

“Yeah, Minnesota won two years in a row. That didn’t mean anything to us.”

The Golden Knights (31-5-5) kept blocking shots, stayed in it even after the Gophers first took a lead, then came back to tie it after Clarkson put a quick run together late in the first and early in the second. Erica Howe’s 34 saves helped clinch it.

“We didn’t care how many national championships they’d won,” captain Carly Mercer said. “This was our year.”

When Maryanne Menefee (power play) and Rachael Bona (off her skate, checked by video review) scored quickly to tie it at 3 in the second, it looked as if the Gophers would soon be back on top yet again.

But it was Clarkson senior defenseman Vanessa Plante breaking the tie with 8:28 left in the game, taking a pass at the point from Vanessa Gagnon after Patty Kazmaier Award winner Jamie Lee Rattray gained the zone.

MacAulay stole the puck and scored on a nifty move on a breakaway, and Clarkson had all it needed, even after Minnesota tried to rally.

“It’s obviously tough to be in this situation,” Minnesota coach Brad Frost said. “We’ve been on the other end of it. We know how great it feels.

“Our kids were successful. They were so successful,” he added. “The culture of our team is unbelievable.”

Sarah Davis gave Minnesota a 1-0 lead off Bona’s faceoff win in the first period, and the Gophers continued to dominate until Clarkson defenseman Renata Fast carried up the left wing to the back of the net and threw the puck to the front to get a faceoff with 1:30 left.

Christine Lambert drove to the net off that draw to put away the rebound of a MacAulay shot to make it 1-1. Shelby Nisbet scored on a deflection just over a minute later, and on a power play to open the second, Rattray scored to give Clarkson a 3-1 lead.

“That was really frustrating,” Frost said, “being up 1-0 and playing really well, I thought.

Minnesota got back to the national final, Frost noted, despite losing six seniors, three of whom played in the Olympics, along with two other Olympians for the season.

“After opening weekend against Colgate,” he said, “I think a lot of people were wondering what we were going to be.”

There was another opening weekend on Clarkson’s mind, though. This year’s seniors played their first NCAA games against Minnesota, losing 5-0 and 3-0 on Oct. 1-2, 2010.

In four years, they turned that around and will bring a championship back to Potsdam in upstate New York.

“We had great support from our fans and their families,” MacAulay said. “Eight hours (of a drive to Hamden) isn’t short.”