No. 1 NRHEG will battle for section title

With a trip to the state tournament on the line, the NRHEG girls’ basketball team has a distinct advantage over its opponent on paper. 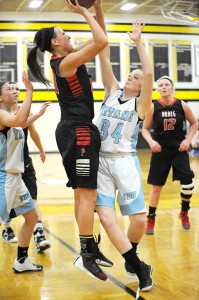 The overall record is far from the only statistic in NRHEG’s favor. The Panthers average more than 20 points per game more than the Raiders. NRHEG also holds its opponents to 10 fewer points per contest.

The Raiders have a slight edge in experience this season in games decided by 10 points or fewer. Norwood Young America has been in that situation 11 times this season and was 9-2.

NRHEG obliterated most of its opponents — winning by an average of more than 40 points per game — and was 2-0 in games decided by 10 points or fewer. Both of those games were against ranked opponents: The No. 1 Class AA Panthers beat No. 2 Kenyon-Wanamingo 67-60 at home on Jan. 9 in their closest game of the season, and they beat No. 5 Class AAA Minneapolis Washburn 87-77 at home nine days later. Minneapolis Washburn moved to a larger class this season after NRHEG eliminated the Millers 69-60 last year in the Class AA state semifinals.

Minneapolis Washburn qualified for the state tournament Thursday with a 74-67 win over Holy Family Catholic.

One of NRHEG’s closest calls this year was Monday against Waterville-Elysian-Morristown in the section semifinals, despite winning by more than 10 points.

The Panthers won 45-34 but were held to their lowest point total of the season. The previous scoring low was 64 points against Blooming Prairie.

“We are preparing as if we’re playing WEM,” Schultz said. “We have to get that squared away first. What Norwood Young America does doesn’t hurt us. We would have a normal game plan, but we think they’ll use some WEM stuff.”

However, it wasn’t solely the Bucanneers’ defense that led to NRHEG’s low scoring output. Schultz told the Tribune after the game that his team had an off-night shooting. The Panthers hope to get back to the pinpoint accuracy that won them 57 straight games dating back to Dec. 21 of 2012.

The Panthers are the defending Class AA state champions, and they finished third at the state tournament two years ago.

However, NRHEG isn’t looking that far ahead.