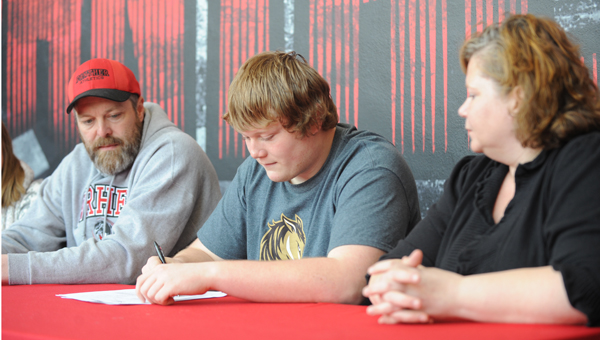 Nic Goette sits between his father, Rod, and his mother, Deb, to sign his letter of intent on Wednesday to play football at Southwest Minnesota State University in Marshall. — Micah Bader/Albert Lea Tribune

On Wednesday, the NRHEG senior tackle signed a letter of intent to play for the Mustangs.

“It still hasn’t hit me,” Goette said. “As soon as I got the letter, I was like, ‘This is really happening,’ and now my dreams are realized.”

Before signing, Goette and the school needed to know if it was a good fit.

“They had to talk to me, have an interview with me and sit down to see who I was,” Goette said.

As a student at Southwest Minnesota State, Goette plans to major in exercise science and sports medicine with the back-up plan of being a history teacher.

At the signing, Goette’s father, Rod Goette and his mother, Deb Goette, sat at the table to show their support. Rod said he liked the campus in Marshall.

“The setting is very nice,” he said. “He liked the kind of feel of a little more of a smaller campus, but it’s still the college life.”

Rod and Deb are proud parents, and the NRHEG football program is proud of turning its 1-8 record from two seasons ago into a 5-4 record last fall.

NRHEG rushed for 1,901 total yards behind Goette and the rest of the offensive line, and Parpart earned the Tribune’s All-Area football Player of the Year honor with 1,495 rushing yards.

Goette finished the season with 25 tackles and a fumble recovery.

Southwest Minnesota State’s football program finished last season with its first winning record since 2008. The Mustangs were 7-5 overall. They started the season 3-4, won four straight games — including a 51-44 overtime victory at home against Winona State — before ending the season against Pittsburg State University from Pittsburgh, Kan.