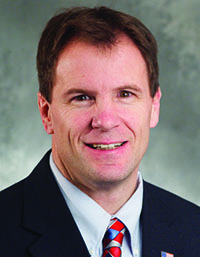 Fast-forward to 2014. We have just learned some good news. Property taxes have stabilized and for many actually will be going down, thanks in large part to the investments in direct property tax relief made by the DFL-led Legislature and Gov. Mark Dayton.

The past decade of steep property tax hikes put an unnecessary drag on our economy by squeezing families, Main Street businesses, family farmers and senior citizens living on fixed incomes.

Those tax hikes resulted from lawmakers’ inability to responsibly balance the budget in an honest and fair way. Lawmakers passed the cost of perpetual budget shortfalls onto the backs of Minnesota property taxpayers by cutting direct property tax relief and local government aid.

The elimination of the market value homestead credit in 2011 resulted in homeowners’ property taxes increasing eight times higher in Greater Minnesota than in the Twin Cities.

When a new DFL-led Legislature took office last year, we said enough is enough. We promised to honestly balance the budget and invest in property tax relief for middle class Minnesotans.

That is exactly what we did.

We did this by reinstating the homestead credit as a direct refund and increasing LGA by $130 million to our cities, counties and townships.

And the facts are in. A new report from the nonpartisan House Research Department illustrates the fruits of our investments to reduce the property tax burden on middle-class Minnesotans. For the first time in over a decade, overall statewide property taxes are going down. That’s quite significant since property taxes have gone up an average of $330 million a year for the past 11 years.

In Freeborn County, 1,400 homeowners will see their refund increase by an average of $150 and 310 renters will see an average increase of $95. And that’s after property taxes are set to drop for homeowners in Albert Lea by 13.8 percent this year. These figures come from our nonpartisan House Research analysts.

The Legislature fully paid for the cost of new investments in property tax relief, while also eliminating a $600 million budget deficit and completely paying back $800 million in debt to our schools, largely by increasing income taxes on the wealthiest 2 percent of Minnesotans and closing corporate tax loopholes. That’s a much more fair approach to balancing our budget and paying for our needs than using the shifts, accounting gimmicks and cuts of the past.

As a result, Minnesota is on sound fiscal footing for the first time in years. A new budget forecast shows a $1.2 billion surplus in our current biennium and a projected $2.6 billion surplus in the next biennium, putting us in a position to pay for additional middle class tax cuts while maintaining a structurally balanced budget into the future.

Going forward, there is strong interest among lawmakers to use more surplus dollars to provide additional property tax relief, especially for our family farmers in Greater Minnesota who still face challenges due to skyrocketing land values.

It’s great to see property taxes are down. Minnesota’s economy is getting stronger and our great state is moving in the right direction.