Phyllis Melverna Nelson, 92, passed away peacefully Sunday, March 23, 2014, at her home in Albert Lea, surrounded by her family. Phyllis was born to Edward and Ida (Johnson) Miller on Sept. 21, 1921, in Ellendale. She graduated from Ellendale High School and attended Mankato University.

Following college, Phyllis was employed at E.F. Johnson in Waseca. She was later employed at Queen Stove in Albert Lea, where she met her future husband, Milburn Nelson. On June 24, 1946, Phyllis and Milburn were united in marriage in Ellendale. 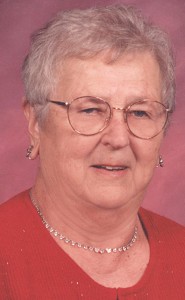 Phyllis was an active member of Grace Lutheran Church, teaching Sunday school and vacation Bible school, and was involved in other women’s groups. She was a stay-at-home mother when her children were young and later went to work at Federal Crop Insurance Agency. She also worked in the activities department and as an aide at Albert Lea Good Samaritan Center.

Phyllis enjoyed homemakers club, card club, crossword puzzles, fishing and went to garage sales to search for treasures for her various collections. She was a 4-H leader for many years. She loved to travel, and she especially loved her annual trips up north with her siblings and her numerous trips to Colorado.

Phyllis was preceded in death by her parents, brother Dwight Miller, sister Eileen Seberson and several sisters-in-law and brothers-in-law.

A memorial service for Phyllis will be at 10 a.m. Saturday at Grace Lutheran Church in Albert Lea. The Rev. Todd Walsh will officiate. Visitation will be from 4 to 7 p.m. Friday evening at  Bonnerup Funeral Service and one hour prior to the service at the church. Interment will be in Hillcrest Cemetery at a later date.

The family would like to express their thanks to Hospice for their kind and gentle care of Phyllis and also Lori Tuchtenhagen and the Rev. Todd Walsh for their kind words and many visits.