Ramona Alyce Hovland Legred, 79, of Bricelyn died Saturday, March 15, 2014, at her home. Funeral Services will be at 10:30 a.m. Saturday at North Blue Earth Lutheran Church in rural Brush Creek. Visitation will be from 4 to 7 p.m. Friday at Bruss-Heitner Funeral Home in Bricelyn, and for one hour prior to the service at the church on Saturday. The Rev. Nancy Dreier will officiate, and interment will be in North Blue Earth Cemetery in rural Brush Creek. Please see www.brussheitner.com to leave online condolences. Bruss-Heitner Funeral Home in Wells is in charge of arrangements. 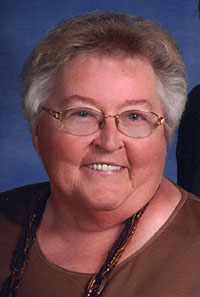 Ramona Alyce Legred was born Oct. 30, 1934, in Albert Lea, the daughter of Alfred and Bennia (Anderson) Hovland. Mona lived all but two years of her life in Brush Creek Township. She was baptized and confirmed at North Blue Earth Lutheran Church. She grew up on a farm where she loved chasing her brother, Richard (who never got angry with her), watching out for her little sister, Sharon, and bugging her cousin, Lester Anderson. Mona and her best buddy, Esther, were inseparable. Together they were cheerleaders for her beloved Bricelyn Braves.

She was united in marriage to Arlen Legred on Sept. 3, 1953, at North Blue Earth Lutheran Church. Together they lived for two years in Killeen, Texas, and then came back to farm.  Throughout her life, she was an active volunteer and leader in the church, 4-H and school.

Mona was a loving and patient wife for 60 years to Alren and the entire Legred clan. Mona’s main role in life was mom. This included, and was not limited to, nurse, chauffer, cook, teacher, minister, counselor, second mom to Monte, Ruby, Nikki, Lisa and Jason, day care provider to Scott and Stacy, peacemaker, organizer, artist and gracious hostess to Legred and Anderson family gatherings. She was officially a mother to four, grandma to seven, great-grandma to four (although she always said they were all great), and a second mom to countless others.

Mona was also a fan. She rooted for the Braves, Warriors, Rebels, Bucs, Zephyrs and Raiders, as well as the Vikings, Twins and Gophers, or any team her family and friends played for. The highlights were state tournaments, and her short lived TV career.

Above all, her life was devoted to God and helping others. Through her quiet and humble manner, she touched many lives.

Mona is preceded in death by her parents; sister, Sharon, and brother, Richard; and brother-in-law, Thilmer Legred.

The family would like to give a big thank you to United Hospice and their staff. Also thanks to all family and friends who brought food and visited.