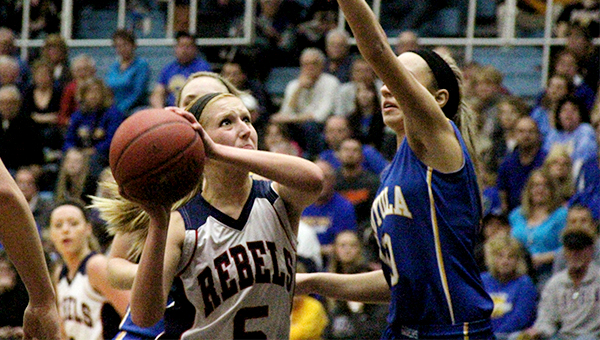 ST. PETER — The longest postseason run in more than a decade and a half ended for the United South Central girls’ basketball team.

The Rebels lost 48-41 against Mankato Loyola Monday in the Subsection 2A South finals at Gustavus Adolphus College. 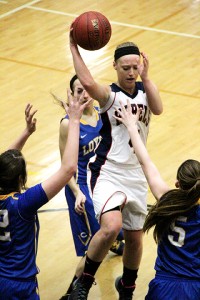 Eryn Eilertson of United South Central dishes the ball to a teammate Monday against Mankato Loyola in the Subsection 2A South finals at Gustavus Adolphus College. — Micah Bader/Albert Lea Tribune

“They shouldn’t be hanging their heads,” he said. “They should hold them high because their accomplishment was 17 years in the making.”

USC and Mankato Loyola met at Wells in the Rebels’ regular-season finale. The Crusaders won 68-45. Preparation time was limited for USC because the Rebels scheduled games on three consecutive school days before the showdown with the Crusaders.

In the postseason rematch, USC had more time to prepare and senior guard Tara Bauman was back from an injury.

Bauman’s presence was felt early. The Rebels trailed 11-3 early in the first half, but a 3-pointer by Bauman sparked a 13-5 run that tied the game at 16 with 4 minutes and 43 seconds before halftime.

A minute later, freshman post Shianne Robertson gave the Rebels their first lead of the game, 18-16, and USC went on to take a four-point lead with 43.7 seconds left on a free throw by Lauren Allis.

However, Mankato Loyola scored six points on three USC turnovers in the last 40 seconds to take a 24-22 lead at halftime.

In the second half, USC was ice cold. The Rebels scored two points in the first 11 minutes and 44 seconds. But USC stayed within striking distance as Anissa Janzig made a put-back to cut the Rebels’ deficit to single digits, 34-26.

Bauman hadn’t scored since her 3-pointer early in the first half, but she struck from the perimeter with five minutes left in regulation. Mankato Loyola hit a 3-pointer on the ensuing possession, but Bauman answered from long range on the Rebels’ next possession.

With 1 minute and 53 seconds left, Bauman hit her fourth 3-pointer of the game to cut Mankato Loyola’s lead to four points, 43-39.

USC had a chance to cut its deficit to two points with an uncontested fast-break layup off of a Mankato Loyola turnover, but it rimmed out, and the Crusaders held on.

Bauman led USC with 12 points. Robertson had a double-double with 11 points and 10 rebounds, and Janzig added eight points and seven rebounds.

The Rebels had three seniors on the roster: Bauman, Lizzy Leland and Eryn Eilertson.

“We had some great senior leadership,” Hendrickson said. “And for the rest of the team, we hope the taste they got this year makes them hungry to keep going next year.”