Memorial services for Richard L. “Dick” Hanson, 77, of Albert Lea will be at 2 p.m. Saturday at Hayward Lutheran Church in Hayward. The Rev. Katie Fick will officiate. Friends may greet the family one hour prior to the service at the church. Interment will be in Hayward Cemetery in the spring. Military honors will be accorded by the Albert Lea area veterans groups. 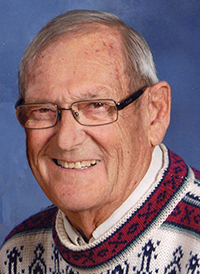 Dick was born April 23, 1936, in Albert Lea, the son of E. Lavern and Harriet (Wayne) Hanson. He graduated from Albert Lea High School and attended Mankato State University. Dick served in the United States Navy from 1957 until his honorable discharge in 1959. On Oct. 22, 1960, he was united in marriage to Gwendolyn D. Skaar at Hayward Lutheran Church.

Dick started working at age 12 delivering newspapers for the Albert Lea Tribune. When he received his driver’s license he also delivered groceries for Larson’s Grocery. Dick worked for 33 years at Wilson & Co. and was a rural postal mail carrier from Albert Lea to Clarks Grove for 11 years. He enjoyed raising sheep, chickens and turkeys on their hobby farm.

Dick was an active member of Hayward Lutheran Church, serving as an usher, church council, Sunday school teacher and in the Lutheran Brotherhood. He and his wife, Gwen, were custodians for many years and took great loving care of the building and grounds.

Dick was a member of the Albert Lea Clown Club, the Hayward Booster Club and Promote Hayward Group, and was a volunteer fireman for 30 years, served on the city council for 24 years and belonged to the Elks and Eagles. Dick loved to travel and camp.

He was preceded in death by his parents, E. Laverne and Harriet Hanson; twin sons in infancy, Mitchell and Michael; daughter-in-law Kathy (Jesse) Hanson; and father and mother-in-law Erling and Audrey Skaar.

Richard will be sadly missed by his loving family and many friends.

Memorials can be sent to Hayward Lutheran Church or donor’s choice.