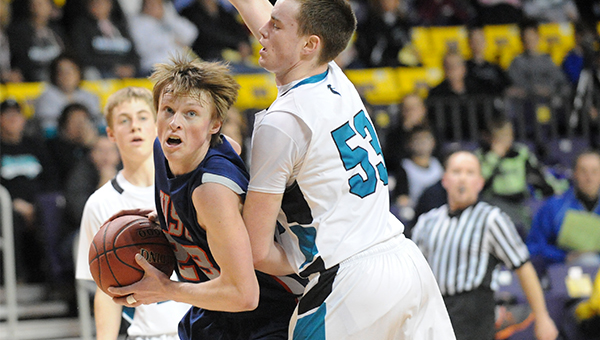 MANKATO — It was a close game throughout, but the United South Central boys’ basketball team fell one win short of making the state tournament.

The Rebels fell 69-61 to Atwater-Cosmos-Grove City on Friday night at Minnesota State University, Mankato’s Bresnan Arena in the Section 2A championship game. 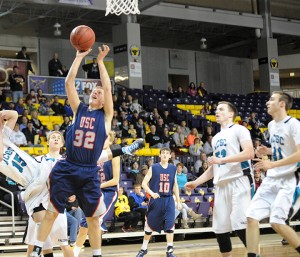 “They’re a nice team,” said USC head coach Robert Stevermer. “It was a battle on the boards, and they gave us some problems inside. Our guys battled and hung around and tried to make it closer at the end. We just couldn’t make the plays to do it.”

USC held a 34-31 lead at halftime, but it was clear that ACGC was ready to turn the tables the minute the second half started. ACGC tightened up its defense and was able to hold the lead for the rest of the game.

“The game kind of turned a little bit. We weren’t as aggressive offensively as we would have liked to be,” Stevermer said. “We just didn’t stop the ball and keep it out of the lane like we had been doing for most of the year. We had a couple possessions where it worked for us, but not enough.”

Stevermer said ACGC’s athleticism was the key to the game.

“They get themselves in good position,” he said. “It’s tough to pass the ball against them. They have quick hands. You’ve got to give them credit. They did a nice job executing what they wanted to do.” 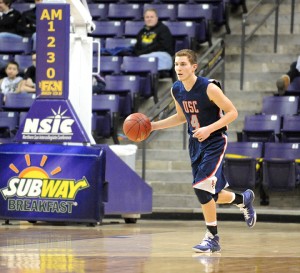 A bright spot for the Rebels was that they created good shots and often grabbed the rebound when those shots were off the mark.

“That’s something we wanted to do: Make sure we get good shots,” Stevermer said. “Good shots usually create good rebounds. It would have helped if we could have made a few shots in the second half. That may have got us going a little bit. We just didn’t get the shots to drop when we needed, and that’s basketball.”

Nate Peterson had 18 points for the Rebels. Riley Kloos had 14 points and nine rebounds.

USC fans filled up one complete side of the 4,800-seat arena, and students and the band were behind one of the baskets.

“We’ve had some great support,” Stevermer said. “We’ve had more fans at road games than sometimes the home team had. I’ve been getting good luck emails and text messages all day, and we really appreciate all that. That’s the beauty of small-town athletics. You get everybody behind you. They want you to do well, and it just makes it fun. But it makes it that much harder when it ends too.”

“There’s a lot of great guys in that room and we’ve had a great season,” Stevermer said. “I couldn’t have asked for anything more from them. It’s unfortunate for us to have it end, but I can’t say anything about this season other than good things. We’ve had a tremendous ride.”

Before falling in the section finals, the Rebels (23-5 overall, 11-3 Gopher Conference) were on a 13-game winning streak.