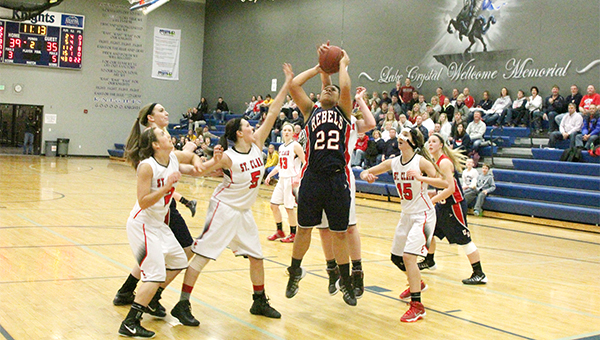 Shianne Robertson of United South Central is fouled in the act of shooting under the basket Thursday during the Subsection 2A semifinals against St. Clair at Lake Crystal-Wellcome Memorial High School. Robertson scored 13 points and grabbed 12 rebounds. — Submitted

The Rebels trailed St. Clair by double digits Thursday in the first half of the Subsection 2A semifinals hosted by Lake Crystal-Wellcome Memorial.

However, USC cut its deficit to four points at halftime and made more progress after the break.

“We switched up our matchups in the second half,” said USC head coach Stu Hendrickson. “It was really a team effort. Taylor Steckelberg shut down their leading scorer, and we played better as a team defensively.”

The Rebels held St. Clair to 18 points in the second half to win 60-46 and advance to the subsection finals.

Anissa Janzig led USC with 15 points to go with seven rebounds, and Shianne Robertson had a double-double with 13 points and 12 rebounds.

The Rebels and Crusaders met during the regular season on Feb. 18, and Mankato Loyola won 68-45.