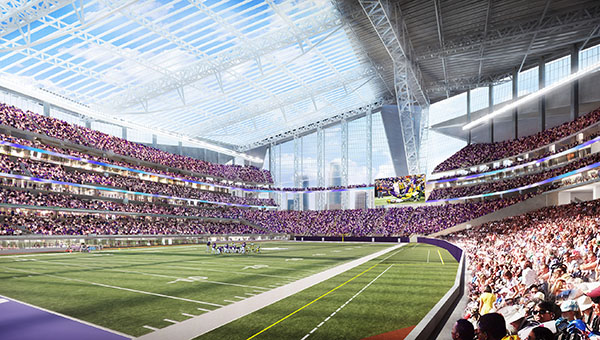 An artist’s rendition of the new Vikings stadium shows a transparent ceiling and a Jumbotron. — Rendering via Minnesota Vikings

Now that the Metrodome has been deflated and construction on the new building has begun, the Vikings and the Twin Cities are hoping their $1 billion dollar investment will be rewarded with a Super Bowl.

The Vikings and Twin Cities political leaders hosted members of the NFL this week as they prepare to present their official bid for the 2018 Super Bowl. Frank Supovitz, the NFL’s senior vice president of events, and several of his colleagues toured the area and took a look at the plans for the new Vikings stadium, offering pointers on how to make the Minnesota bid stand out. The Twin Cities are competing with New Orleans and Indianapolis for the bid. They will make their final pitches at an NFL owners meeting in May.

“The saga that we all went through on the new stadium played out in front of the NFL owners,” said Lester Bagley, the Vikings’ vice president of public affairs and stadium development. “Every difficult discussion we had and every disappointment we had was shared with owners. They do favor communities that have resolved difficult issues. It was a difficult issue, but a great public-private partnership. …. The NFL is very aware of it. The owners are very aware of what our community did to step up and deliver on the stadium.”

Detroit, Indianapolis and New York/New Jersey are among those cities that have hosted a Super Bowl after building new stadiums, and the Vikings want to be the next team to make that happen. Supovitz and his staff spent a few days in the Twin Cities examining logistics and providing advice on what civic and sports leaders should include in their bid to try to convince NFL owners to return to a wintry climate again.

“We’re here as guides and coaches, as we are with the other two teams and other two cities so they can put their best foot forward,” Supovitz said on Friday.

The Twin Cities previously hosted a Super Bowl in 1992. The Vikings are scheduled to move into their new stadium in 2016.

One of the obstacles in Minnesota’s way centers on tax breaks that other cities have granted the NFL in years past, including players’ salaries and tickets. State lawmakers are discussing the matter, with some expressing concerns that too many tax breaks will reduce the positive economic impact of bringing a Super Bowl to Minnesota.

“It’s an incredibly competitive environment,” Supovitz said. “And all of those types of configurations figure into what the bottom line of a Super Bowl might be and whether it is financially competitive.”

Michele Kelm-Helgen, the chairwoman of the Metropolitan Sports Facilities Commission, said not granting the NFL those tax breaks could jeopardize their chances of winning the bid. She said Indianapolis reported a net gain in tax revenue of $39.9 million after hosting 2013 Super Bowl.

“At some point people need to look at what the tax gain is that we would be giving up if we’re not competitive,” she said.

Both Kelm-Helgen and Bagley left the meetings with the NFL optimistic about their chances of winning the bid.

“I think we feel good,” Bagley said. “The reaction we got from them was positive. They know this is a great and dynamic community. They know that we have a great stadium.”

Said Kelm-Helgen: “I’m cautiously optimistic. I felt very positive about it. But it clearly is a challenge nonetheless to convince them that the city is going to be able to step up and do this. I feel like it’s ours to prove that we can be successful in this bid and putting together this event.”