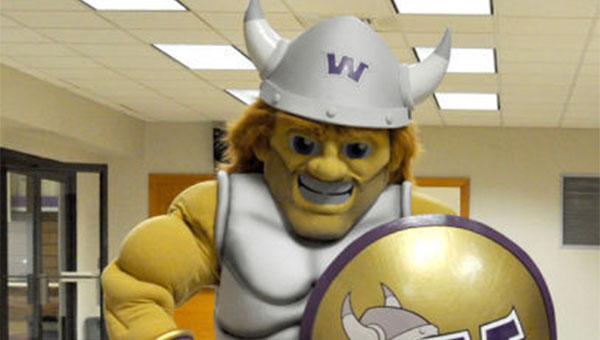 Waldorf College has a new mascot. The name “Warrick” was chosen for the mascot in a recently completed poll. –Submitted

FOREST CITY, Iowa — Waldorf College unveiled a new mascot during its Homecoming celebration in the fall of 2013, but he remained nameless for several months until a campus-wide vote determined he would be called “Warrick.”

The Waldorf College Student Senate has been talking about replacing the old mascot, Wally, for several years. The students said they wanted something that looked a little more like a warrior and less like what they called a “friendly grandpa.”

Wally was developed in the 1980s and was starting to look a bit dated, according to Jason Ramaker, dean of students at Waldorf.

“He served his time well and was certainly a loveable character that Waldorf responded to,” he said.

Many pieces of the mascot have been lost, including Wally’s original gloves and boots.

Due to the high expense of a custom designed high quality mascot, the Student Senate teamed up with the Waldorf College Student Life and Intramural departments to make the project possible.

The Student Senate then reached out to Waldorf students and faculty for name suggestions. Of the more than 200 submissions, four names were chosen as top contenders: Frodlaw (Waldorf backward), Walcules, Walson and Warrick. In an online poll that ended Feb. 21, Warrick prevailed.

Ramaker was astonished at the amount of detail that goes into designing and creating a mascot.

“Color, fabric, laces, headwear, facial hair, chest size — it’s all discussed until there is a final image proof. It’s probably something you only do a handful of times a century,” he said.

Warrick features state-of-the-art technology to keep performers wearing the Warrick costume cool and comfortable, including a cooling pad in the chest and a fan in the head.

“Everybody loves a mascot. They represent your school, school colors and give unique identity to the college that students, employees and guests can enjoy,” Ramaker said.

In the future, he hopes to find a place on campus to showcase Wally as a beloved historical symbol.