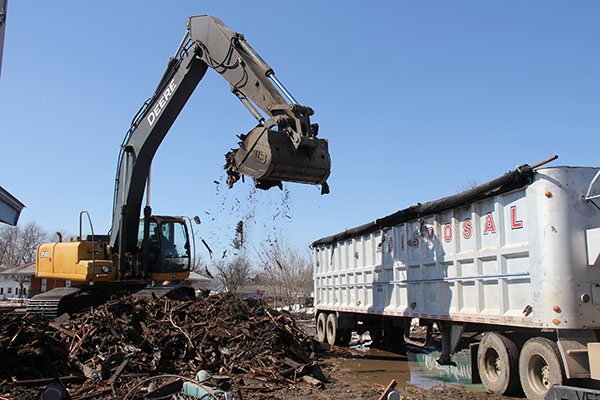 Crews with South Central Minnesota Excavating & Septic clear away debris from the former Frank Bros. Elevator on the west side of Broadway in Wells on Thursday afternoon. – Sarah Stultz/Albert Lea Tribune

WELLS — A former elevator in Wells that has sat empty for more than a dozen years is being demolished this week.

And several residents said they are pleased to see it happen. 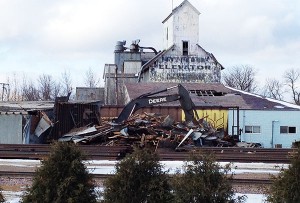 Crews demolish the former Frank Bros. Elevator off of Broadway on Wednesday afternoon. The large structure in the background is forfeited to the state and will at some point be for sale through a sheriff’s sale. – Sarah Stultz/Albert Lea Tribune

Crews with South Central Minnesota Excavating & Septic began demolishing the Frank Bros. Elevator structures west of North Broadway on Wednesday, and on Thursday they cleaned up the debris and then planned to move forward with the demolition of the two remaining structures on the east side.

“It’s a happy day in Wells because it has been a long time waiting,” said Tom Loonan of the State Bank of Easton, which owns the property.

The structures had been under foreclosure since June 2013.

“I think most of the community is ecstatic to see that go,” said Wells Administrator Robin Leslie. “Those are blights in the community just sitting there not doing anything anymore.”

Leslie said getting the properties on the north end of Broadway cleaned up has been a high priority for her. She noted her files show the city has worked to have the buildings removed since 2006. 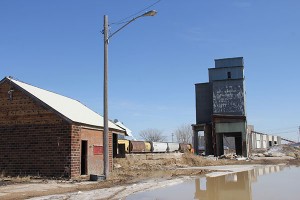 These two structures on the east side of Broadway in Wells are also slated to come down this week. – Sarah Stultz/Albert Lea Tribune

Mark DeLaittre with South Central Minnesota Excavating & Septic said it took about a half hour to take down the main structure on the west side of the street on Wednesday. During the work, crews discovered an antique grain cleaner.

DeLaittre said people have been driving by thanking them for their work.

After the land is cleared, the bank will put the property up for sale.

A large building north of the demolished structures that also bears the name of Frank Bros. Elevator was forfeited back to Faribault County in 2012 and will be for sale at some point through a sheriff’s sale, Leslie said.