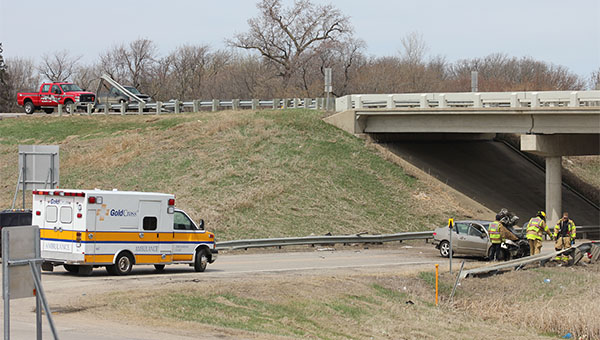 One person was reportedly injured Saturday afternoon in a vehicle crash on Bridge Avenue under the Interstate 90 overpass. It is unclear if the vehicle was driving on I-90 at the time of the crash. — Sarah Stultz/Albert Lea Tribune

A 35-year-old Shoreview woman was injured Saturday afternoon after she reportedly went off Interstate 90 and down an embankment, coming to rest on Freeborn County Road 22, north of McDonald’s.

Heidi E. Wise was transported to Mayo Clinic Health System in Albert Lea for injuries that were not life-threatening, according to the Minnesota State Patrol.

The report indicated Wise was driving eastbound on I-90 in a 2003 Honda Accord, when the vehicle reportedly struck the bridge guardrail over Freeborn County Road 22 and then drove off the road.

She was wearing her seat belt, and no alcohol was detected.

The report stated the road was dry at the time of the crash.