A craft monster: Green Mill Restaurant & Bar is known for its beer selection 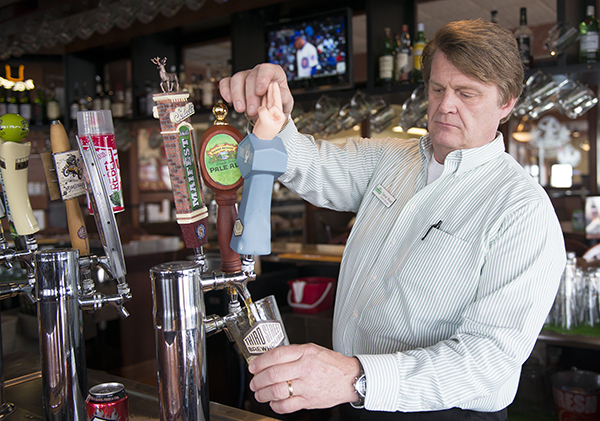 David Mord has maxed out the number of beers he can have on tap at Green Mill Restaurant & Bar, but if he had it his way, he would add more, and they’d all be craft beers.

Mord is the general manager of Green Mill, 2218 E. Main St. in Albert Lea. The location used to have its own brewery on site, but it closed about 10 years ago.

A change occurred in the tastes of Albert Lea beer drinkers. About seven years ago, liquor stores began carrying a few craft beers. In the past three years, however, the choices have diversified as the demand has risen. Beers that used to be in the back cooler are now closest to the register.

Mord starting managing Green Mill three years ago and recognized the trend. In fact, it could be said he fanned the flames. Since he has been manager, Green Mill has been known for having the most beer selections among local watering holes.

The restaurant and bar now has 24 beers on tap, and Mord said 16 of those are from craft breweries. Four breweries out of Minnesota — Summit Brewing Co., Third Street Brewhouse, August Schell Brewing Co., and Surly Brewing Co. — are mainstays on tap.

Mord said Summit Extra Pale Ale was one of the first craft beers to go on tap at Green Mill, and as the demand for beers from independent brewers grew, more beers were added.

“You have to just stick it out there for people to try,” he said. “We’ve been getting them to try new things.”

Mord has been a homebrewer for about 25 years and said an establishment’s delivery and serving of the beer is just as important as the quality of the beer itself. To him, the two most important components of serving good beer is keeping the glasses and the lines leading to the taps clean. If they’re not up to par, taste can be distorted, he said. The lines at Green Mill are cleaned specially every week by an outside company. Mord also said there’s a way to tell if your glass is clean when drinking beer.

“If the beer’s leaving a webbed pattern on the sides of the glass, it’s clean. When you can see through a glass clearly, and there’s no webbing or foam sticking to the sides, it’s not as clean as it should be,” he said.

A big component to Green Mill’s growing craft beer demand is the tap takeovers that routinely take place. Third Street had one almost two months ago, with Alaskan Brewing Co. following up a month later. A Deschutes Brewery takeover is planned for this month, and a Sam Adams takeover will happen in May. The takeovers host a number of different styles of beer from the breweries selected, and many times the brewers themselves will stop in to talk to people about the process.

Albert Lea’s Green Mill has over 300 members in its mug club, and Mord said about 120 of them are regularly active. To him, the ever-expanding consumer base for craft beer is exciting, especially for it to be happening in a smaller community like Albert Lea.

“I love beer. … Craft beer is one of the fastest growing beverage markets out there,” he said. “We’ve created our own little monster.”