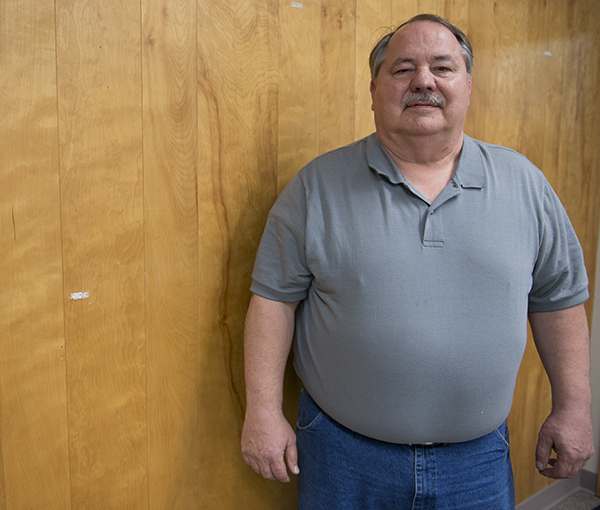 John Forman stands in the newsroom of the Albert Lea Tribune. He is a frequent letter writer and a former CEO of Alamco Wood Products. He retired March 31. – Colleen Harrison/Albert Lea Tribune

There is a retirement party Thursday for a guy who likes to work with wood. In fact, he was so good at it that he rose to become CEO of Alamco Wood Products.

After 47 years of smelling the sawdust out there on South Ninth Street in Albert Lea, John Forman retired March 31. At his retirement party from 3:30 to 6 p.m. at Wedgewood Cove Golf Club, people will get an opportunity to meet the new general manager, Kris Pierce. Forman said he was recruited from Hon Manufacturing in the Quad Cities. What’s more, come hungry; the hors d’oeuvres won’t be light.

If people don’t know Forman for his role at Alamco, they know him for his letters to the editor. He still will be doing that in retirement.

“I’ve always been a person who likes to argue,” he said.

He said he appreciates people mentioning they read his letter, especially when they disagree.

“It shows they took the time to read the letter and form an opinion,” he said.

Forman was the fourth child among 13 kids. He said he was used to competing for time and material. Arguing skills were honed early.

Forman’s entire career was spent at Alamco. He started there part time working a summer job. His college roommate at Mankato State University was Jeff Wulff, who suggested he apply for the job. He did that for two summers.

Wulff was the son of plant manager Russ Wulff. The two buddies had graduated from Albert Lea High School and played football together. Forman was a tackle on offense and defense and Jeff Wulff was a defensive end. They remain friends to this day.

For the last five years, Forman worked as the general manager of the plant. He said though CEO Tom Bell lives in White Bear Lake, he has continued to be a corporate citizen, with Alamco contributing to causes Albert Lea. He said he has spent millions in improvements to the plant.

It was back in 1971 that Forman married his wife, Lioba. Forman met her on a blind date in college. She had 12 brothers and sisters and so did he. Her friends thought that made them a good match. They were right. They have raised three grown children.

Forman can rattle off all kinds of facts about the glued laminated timber beams Alamco makes. They make many poles for transmission lines. He said for poles above 85 feet high it is less expensive to buy laminated poles than to cut down tall, old-growth timber.

He said Alamco has built projects as far away as Japan. Its wood products can be found at a sports facility in Himi and a golf course near Tokyo. Several temples and schools in Japan also use Alamco products.

In town, Albert Leans are familiar with Alamco’s beams on many park facilities, from the Edgewater Bay Pavilion to the Pioneer Park picnic shelter to the ceiling of the City Arena. One of Alamco’s customers is the nation’s largest builder of park buildings.

The wood comes mainly from tree farms in Texas and Louisiana. Forman said trees are a crop, only instead of taking a summer to grow, they take 20 years. They are bred and fertilized like other crops.

The land had been used for tobacco and cotton, but with the reduction in cigarette use and the rise of synthetics, farmers were seeking something new to grow. Trees, it turned out, were good for their local economy, Forman said.

Forman isn’t completely done at Alamco. He will represent the company on the boards of the West Coast Lumber Inspection Bureau and the American Institute of Timber Construction. And he will consult at the plant once a week.

In their free time, John and Lioba Forman plan to travel. They want to go to Ireland, cruise the Caribbean Sea and take the grandchildren to places like St. Louis. The voters there agreed to a higher tax to keep the zoo, art museum and many other attractions free of charge. The Gateway Arch, he noted, has a charge and is run by the National Park Service.

Lioba is a retired special education teacher. John said she tells him she flunked retirement because she now has a part-time job at Lakeview Elementary School as a reading interventionist.

John said he wants to improve his golf game. He hasn’t played for three or four years, but his wife plays.

They have three houses, one of which is on Fountain Lake. He lives southwest of Albert Lea but wanted a lake house that didn’t require a long trip north. He likes house projects, just like he enjoys working with wood. It’s his hobby.

Interesting fact: He was active in Boy Scouting in Albert Lea for 25 years.