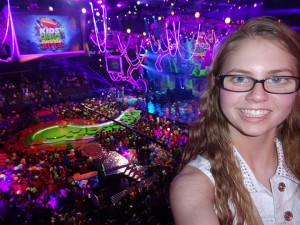 So when she found a Nickelodeon contest to win tickets to the Nickelodeon Kids’ Choice Awards in Los Angeles she jumped at the chance to try.

The contest called for people to record themselves acting as if they were accepting an award at the awards show. They had to submit their videos by March 14.

A week later, on March 21, Julissa, who lives in Albert Lea, started getting emails from the kids’ cable channel asking her to sign release forms — she found out she was the grand prize winner.

“I was screaming and jumping around,” she said.

She had won tickets for four for a one-night, two-day trip to Los Angeles, including the airfare, hotel stay and tickets to the awards show.

The following Monday, on March 24, Julissa’s mother, Laura Mae, drove up to the Twin Cities to sign paperwork and to pick up the tickets at the Mall of America.

On March 29, Laura Mae and Julissa, along with Julissa’s brother, Scott, and her cousin Ashley, traveled up to the Minneapolis-St. Paul International Airport and boarded their plane to Los Angeles.

When they arrived, they rented a car, drove to their hotel, quickly changed clothes and headed to the orange carpet — Nickelodeon’s version of the red carpet — where celebrities were arriving.

Seventeen-year-old singer/songwriter Austin Mahone was performing, Julissa said, and she and the others began taking photos.

Shortly after, they went inside the building where the awards show would be held, which Julissa described as “very cool, all decorated.”

She said her favorite part was seeing all of the celebrities — people she has grown up watching on Nickelodeon.

She met Willow Shields from “The Hunger Games” movie, among other famous people. 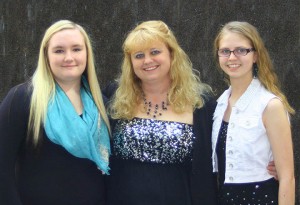 Ashley, Laura Mae and Julissa Gilbertson pose for a photo while on a trip a week ago to Los Angeles for the Nickelodeon Kids Choice Awards. –Submitted

The group ended the weekend with a trip to the beach before traveling back to Albert Lea March 30.

“It was a whirlwind, but it was a lot of fun,” Laura Mae said.

Julissa previously won a contest to meet actress and singer Selena Gomez and attend one of her concerts.