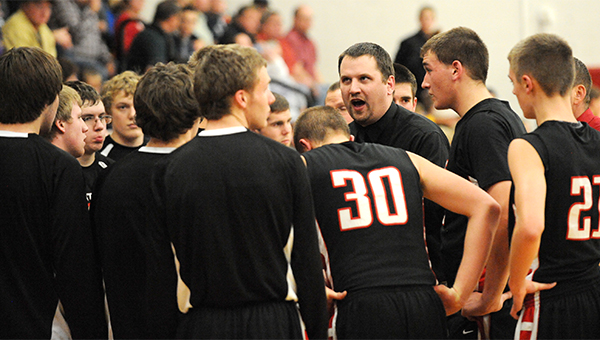 NRHEG boys’ basketball head coach Pat Churchill instructs his team during a timeout Jan. 13 during a 75-64 home win against St. Clair. Churchill led the Panthers to a 19-7 overall record and a Gopher Conference title this season. — Drew Claussen/Albert Lea Tribune

The Panthers flipped last season’s 6-19 record to 19-7 this year, and they did so with an abundance of young talent that provided one of the most potent offenses and stifling defenses in the area. 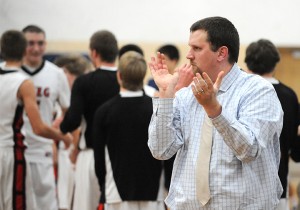 NRHEG’s top four scorers were three juniors and freshman Oakley Baker. Spencer Tollefson led the Panthers with 16.4 points per game, Baker began his first varsity season with 15.6 points per game and Trevor Tracy and Kevin Kalis both averaged more than 12 points per game. Those totals gave the Panthers four of the top seven spots in the Tribune’s seven-team scoring leaders list, including the first- and second-place spots.

The Panthers’ Gopher Conference record was 11-3, and they won their first conference title in 18 years, despite posting 20 wins in 2009-10.

This season, NRHEG started 6-0 and won nine of its first 10 games. The Panthers’ fifth game of the season was at United South Central, and NRHEG needed to erase a nine-point deficit with less than 4 minutes left. The Panthers rallied to win 68-67 and started 5-0 for the first time since 2004. However, USC won the rematch 77-62 at NRHEG a month later.

Q: After finishing last season with six wins in 25 games, were you surprised to see the team start 6-0 this year and win nine of its first 10 games?

A: A little bit. I knew we gained a lot of experience from last year. I also felt that even though we weren’t winning many games last year, that we were improving as a team. So I felt that we were going to be better this year, but I no idea that we would jump out to a 6-0 start.

Q: Since success isn’t always measured in wins and losses, how much would you say the experience young players received at the varsity level last season helped prepare the group for this year?

A: It helps. The speed of the varsity game is so much faster than JV, so playing at that speed for an entire year helped our team grow and get better throughout the year.

Q: United South Central coach Rob Stevermer picked your team, Maple River and Blooming Prairie to be front-runners in the Gopher Conference before the season began. Knowing the talent that you had, how much pressure was there to live up to expectations?

A: I think that Rob might have been the only one to say that. We didn’t really know how good we could be, but we knew that we would be better.

Q: NRHEG produced four of the top seven scorers in the area this year. What made your team such a threat offensively?

A: This was the most balanced team I’ve been around here at NRHEG. We had two tremendous shooters in Trevor (Tracy) and Oakley (Baker), a big kid in Kevin Kalis, who keeps getting better, and Spencer Tollefson getting to the hoop and being a facilitator. It makes you so much harder to guard when you have three to four people scoring. Teams have to decide how to stop you, and it’s usually hard to stop them all.

Q: What sets this group apart from the other teams you’ve coached at NRHEG?

A:  These kids have worked at basketball to become better. We have kids who work on hoops almost 12 months out of the year. Their dedication allowed them to have the success we had this year.

Q: What was your highlight of the season?

A: My highlight was winning the conference with USC for the first time in 18 years.

A: I coached junior high football for three years, junior high softball for one year, I was an assistant coach on the varsity golf team for a year, the freshman baseball coach for two years, and this is my first season as the varsity baseball head coach.

Q: Where did you go to high school? What sports did you play, and what year did you graduate?

A: My freshman and sophomore years I went to high school in Spring Valley, Wis. My junior and senior years I attended high school in Luverne. I graduated in 1996 and played basketball — my dad was my head coach at Luverne. We lost in the section finals my senior year to MACCRAY. I also played baseball, and we took third place at state my junior year.

A: I attended Minnesota West Community and Technical College in Worthington, where I played basketball for two years. I then graduated from the Minnesota State, Mankato University and received a Master of Education degree from Saint Mary’s University.

A: I think that you have to be yourself when you coach. I don’t try to model myself after anyone, but I’ve had two people I can go to a lot in my dad, who has 10 years of varsity coaching experience, and my brother, who has been the the boys’ basketball head coach in Hayward, Wis., for six years.

Q: What are your plans for the team to work on in the offseason?

A: We need to keep working at the little things to get better, and we need to be better defensively if we want to take the next step next season.

A:  We have our team goal of getting further in the playoffs next year. We feel that we have the pieces to compete, but we know that we need to get a lot better to get where we want to go.