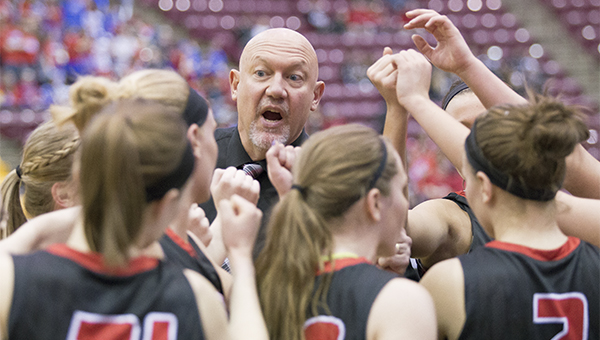 John Schultz’s 10th year as coach of the NRHEG girls’ basketball team couldn’t have played out much better.

As Associated Press girls’ basketball Player of the Year Carlie Wagner said after the Class AA state championship game, “It’s (like) a dream.” 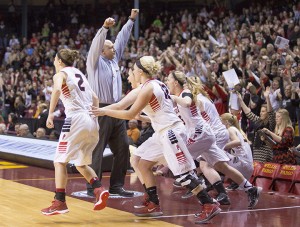 NRHEG head coach John Schultz celebrates as his team runs onto the court after the Panthers won the Class AA state championship on March 22 for the second consecutive season. — Colleen Harrison/Albert Lea Tribune

The closest game of the season was a 67-60 win over Kenyon-Wanamingo during the regular season in New Richland. That game was NRHEG’s only win of the year by fewer than 10 points.

Kenyon-Wanamingo met NRHEG in a rematch on the biggest stage in high school sports: the state championship game at Williams Arena on March 22. NRHEG won 71-61 and handed the Knights their second loss of the season. In 33 games, Kenyon-Wanamingo’s only losses were against NRHEG.

The 200th win of coach Schultz’s coaching career for girls’ basketball came on Dec. 20 against Maple River. The Panthers improved to 5-0 with a 90-35 beatdown of the Eagles.

Despite winning every game by double digits except one, NRHEG had a tough schedule. The first major test the Panthers faced was in the second game of the season during the Tip-Off Classic on Dec. 7 in Hopkins. NRHEG was pitted against Mountain Iron-Buhl, a team that was ranked No. 2 at the time in Class A. The Panthers prevailed 81-67.

The second big test was eight games later in the first meeting against Kenyon-Wanamingo, who was ranked one spot behind NRHEG in the state polls at the time.

On Jan. 18, the Panthers faced their third state-ranked opponent in Minneapolis Washburn. At the time, the Millers were ranked No. 8 in Class AAA. Washburn had moved up a class after NRHEG beat them in the Class AA semifinals the previous year. The Panthers prevailed again with an 87-77 home win.

Wagner led NRHEG and the Tribune’s seven-team coverage area in scoring (37.1 points per game), assists (5.3) and steals (4.4). Coach Schultz’s daughter Jade was a Second Team All-Area selection along with Maddie and Marnie Wagner.

Q: After winning the state championship last season, how much pressure was on the team to repeat this year?

A: There was tons of pressure, but we never talked about it. It wasn’t easy for them to think that even one loss would be below our expectations for the year. We knew that every team would bring their A-game and try lots of gimmicks to try to slow us down. So we really focused on one game at a time and spent a lot of time working against gimmicks. Our girls play well under pressure, so maybe that helped us, too.

Q: With a 32-1 record last year and a 31-0 record this year, how was your team so consistent game-in and game-out?

A: The key is to control the things you can control. You can always hustle, rebound and play tough defense every night no matter who you play. So when the shooting percentage is low or the other team gets hot, you can still win the game. That is also the key to the playoffs: rebounding and defense. You cannot expect to make it to the finals by shooting well every game.

Q: What are some of your favorite moments that you’ll remember about this season?

A: Every day was awesome! These kids showed up with a smile, a great work ethic and an attitude that was unbelievable. The Minneapolis Washburn game was a highlight when we proved that the supporting cast could carry us against anyone. Carlie had to sit for 12 minutes, and the rest of the team stepped up. The state tournament was unforgettable to see these girls up there for the third year in a row and just handle themselves exactly the way you would draw it up. Also, one of my favorite moments was to see the size of our crowd at every game, home or away.

Q: How important was it for everyone on the team to accept their roles and play as a team?

A: Accepting roles was the main reason for our success. It builds success, chemistry and pride. I never had to worry about anyone being jealous or mad at each other. They knew that it took every role to be filled to win. If no one takes pride in the role of a rebounder, scraper, defender or thrasher, then we cannot emphasize the importance of those things that win us games.

Q: The Panthers had four players in area’s top 10 in assists. How do you encourage unselfish play?

A: I encourage getting the ball up the floor as fast as you can and scoring without turning it over. The unselfishness was a way for our team to show off its good chemistry. A lot of assists came from our leading scorers. It was a way for them to give back the the rest of the team for doing their jobs without recognition.

Q: How special was it to coach your daughter, Jade, her senior year and to win the title?

A: It was very special. I have coached and hauled her and her classmates to tournaments since third grade. I bet we went to 50 tournaments over the years either for school ball, Amateur Athletic Union (AAU) or off-season ball. It was special to be around Jade and watch her develop and learn life lessons through basketball. It was also fun to watch her grow into friendships with her teammates. I realized how much it meant to her after the final game against Kenyon-Wanamingo. She finally cried. I had never seen that before, not even when she ripped her ACL (the anterior cruciate ligament in her knee) and missed the state semifinal and championship game last year, or when she suffered a blown ankle or separated shoulder.

Q: She’ll be going to the University of Minnesota along with Associated Press Player girls’ basketball Player of the Year, Carlie Wagner. Are you excited to start the new chapter?

A: Yes, it will be so interesting to get a new perspective on college basketball. I cannot wait to be spectator again!

A: I was the head softball coach for five years at Ceylon High School, a football coach for 29 years and a basketball coach at the elementary, junior high, B-squad and varsity levels for boys and girls for 22 years.

Q: Where did you go to high school? What sports did you play, and what year did you graduate?

A: I went to Ceylon High School. I played on the offensive and defensive lines in football,  center on the basketball team and was a pitcher and first baseman in baseball. I graduated in 1981.

Q: Where did you go to college? Did you play sports there?

A: I went to college at University of Wisconsin, Eau Clair for one year and Southwest Minnesota State University for three years. I played football and was a defensive linemen at both places.

A: Corwin Schmidt. He was my coach in high school, and I was given the opportunity to coach as his assistant for 5 years after college when I taught at Ceylon High School for five years. He could get kids to play hard and to play for each other.

Q: What are your plans for the team to work on in the offseason?

A: No plans. I am retired as of yesterday (Thursday).

A: My goal is to watch all three of my kids play basketball. I will be coaching my youngest daughter Sidney’s fourth-grade team. I guess I got sent down the minors!