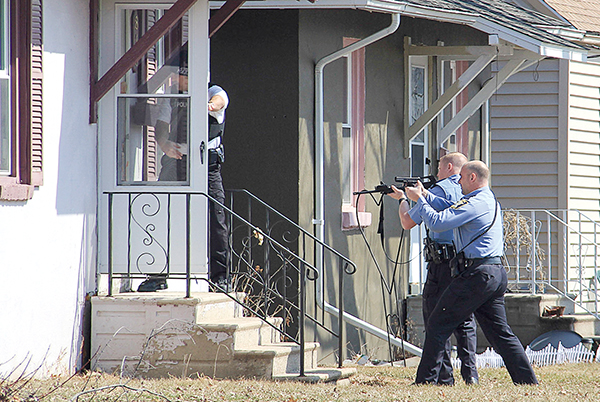 AUSTIN — Austin police are investigating whether a shooting incident that severely injured a 22-year-old Austin man was an accident or intentional.

Lt. John Mueller said the 22-year-old, who suffered a gunshot to the face Monday, was being treated at St. Marys Hospital in Rochester. St. Marys officials said they could not release information on his condition.

Police respond to a report at the Ankeny Minimart No. 1 store at 1205 Oakland Place Southeast in Austin Monday afternoon. – Jason Schoonover/Albert Lea Tribune

Police were called to the southwest part of Austin just before noon Monday for an unknown problem after a 911 caller abruptly hung up.

Officers investigated the scene of the shooting, a house at the 800 block of Ninth Avenue Southwest, for more than an hour Monday. They cordoned off the house, entered the home with guns drawn and eventually took a woman into custody.

Police later surrounded a car at Ankeny’s Mini Mart at 1205 Oakland Place S.E. shortly after 1:30 p.m. Monday in relation to the shooting. Mueller said police followed the car from the Austin hospital after officers tried talking to a man at the hospital. Police briefly took four men into custody.

All four men and the woman were released from custody.

Mueller said everyone involved knew each other and it’s unknown whether the shooting was an accident. Police haven’t recovered the gun involved in the shooting and it’s unclear who the gun belonged to.