Participants in the 2014 March of Dimes March for Babies make their way toward The Hormel Institute Saturday morning. – Eric Johnson/Austin Daily Herald

AUSTIN — Hundreds of people gathered at the Holiday Inn in Austin Saturday to take big steps for little infants. 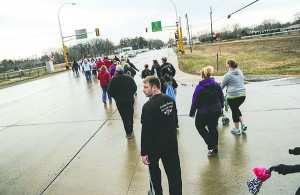 “It’s awesome,” said March for Babies chairwoman Lisa Morehouse. “That’s what we walk for, and that’s what we are raising this money for.”

The chapter serves the Austin and Albert Lea areas.

Ambassadors Mark and Mikayla Austin were on hand to thank the crowd for their support and to tell their story in hopes it would inspire others to get involved.

The couple, who live in Austin, lost their twins after Mikayla prematurely gave birth in December 2009, five months before her due date.

Mark and Mikayla had tried for several years to have a child, but were unable to. They started

in vitro fertilization and successfully became pregnant with twins.

Yet a routine visit to the doctor five months into Mikayla’s pregnancy turned tragic when doctors found an infection in each twin’s placenta.

Doctors rushed to induce Mikayla, who would give birth to the twins. But Noah, born weighing just 13 ounces and Isabelle 15 ounces, didn’t make it home.

“We came through the experience looking at it as a growing experience,” Mikayla told the crowd at Torge’s Live Saturday morning.

The Austins received a lot of support from their friends, family and the community, which was part of the reason why Mikayla decided to walk in the March for Babies on a whim in 2010 after reading about the walk the day before in the newspaper.

“Every year since we’ve been walking in support of helping babies and making a better life for them,” Mikayla said.