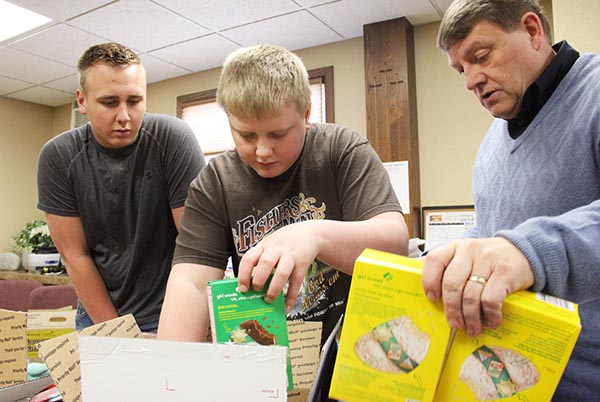 Members at one Albert Lea church are taking their time and talents to brighten the lives of troops and children in Afghanistan.

The effort, at New Life Christian Church, began in January after the Rev. Vern Harris talked with his brother Maj. Jess Harris, who is serving in a command center in Kabul, the capital of Afghanistan.

Vern Harris said his brother voiced concerns of military budget cuts and noted that the soldiers are now receiving only two prepared meals per day. Many of the soldiers where his brother works are officers and work between 16 and 18 hours per day. The soldiers have Meals, Ready to Eat, or MREs, to account for their third daily meal.

After hearing this, the pastor said the initial goal was to send one or two boxes of snacks a month, but when he found how many people benefited from the boxes, the effort multiplied.

Now, thanks to donations, the church mails two or three boxes a week.

“We realize we can’t feed the entire Army, but we can encourage some,” Vern Harris said. “It’s our hope to increase morale and let them know they’re appreciated and that we really value what they’re doing.”

Church members bring in donations of homemade cookies on Sundays, along with snacks, coffee and toys for children there. Three local Girl Scout troops also heard about the project and wanted to get on board.

“We felt bad they’re only getting two meals a day, so we thought we could at least send a snack,” said Angie Nelson, leader of Troop 40758.

On Tuesday, a half dozen people gathered at the church to pack three boxes. The boxes were large flat-rate boxes through the post office that cost about $15 each to ship.

A detailed customs list accompanied each box and was filled out with what items were packed.

The boxes were mailed later that afternoon and were expected to arrive in Afghanistan in seven to nine days.

“It’s good to help people overseas and especially the children,” said 15-year-old Philipp Wagner, who helped pack the boxes on Tuesday with his brothers and parents. “It’s fun.”

Vern Harris said his brother shares stories of how the boxes are impacting the other soldiers and even some foreign officers they are working with.

“It impresses them a great deal that these people that don’t even know them are sending things,” Vern Harris said.

He recalled one woman, a strategist, who cried when she saw a box of Girl Scouts Thin Mints.

She had been a Girl Scout when she was younger, and her daughter is in the same program.

“It swept over her,” Vern Harris said. “There was so much that represented home to her.”

Whatever is not used at the command center is given to U.S. Marines.

“It’s never a matter of whether it can be used but whether we can afford to send it,” he said.

The pastor said he has received many positive comments from both the church members and others outside of the church about the ministry.

The church is looking for help with shipping costs. 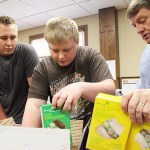 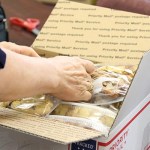 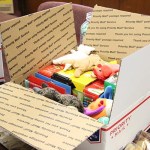 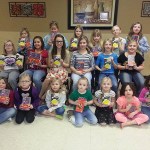 Girl Scouts in troop Nos. 40758, 40208 and 41005 donated Girl Scout cookies for the boxes that New Life Christian Church is sending to Afghanistan. Pictured are Girl Scouts from Troop 40758. – Submitted