Funeral services for Clayton “Clayt” F. Severtson of Glenville will be at 2 p.m. Monday at First Lutheran Church in Glenville. The Rev. James Rushton will officiate. Interment will be in Graceland Cemetery. Military honors will be accorded by Albert Lea veterans organizations. Visitation will be from 5 to 7 p.m. Sunday at Bonnerup Funeral Service and one hour before the service at the church. 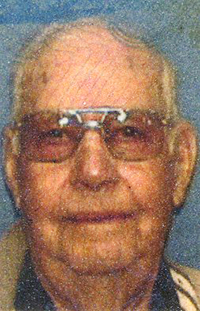 Clayt, a strict union man, worked at Wilson & Co. for more than 39 1/2 years before retiring. After retiring, Clayt and Marvel lived in the Park Rapids area. Marvel died in 1990, and Clayt returned to live in Glenville in 1997. He still enjoyed going up to Emmaville, near Park Rapids, for the summer months.

Clayt was involved in bowling leagues and the American Legion in Albert Lea and Glenville.

He had many happy memories of the fishing trips to Rainy River.

Clayt had the gift of gab and loved gatherings, especially birthdays. He thought birthdays were worth celebrating and made sure everyone he knew got acknowledged  either with a card or by sending their name into the radio.