Memorial services for Florence M. Stephan, 94, of Albert Lea will be at 10:30 a.m. May 17 at the Church of St. Theodore. Interment will be in St. Theodore’s Cemetery. Visitation will be one hour prior to the service at the church. Online condolences are welcome at www.bayviewfuneral.com. 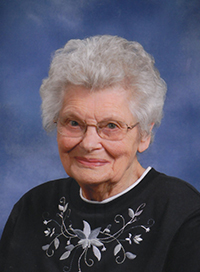 Florence M. Stephan was born on Aug. 15, 1919, in Johnson Creek, Wisc., the youngest daughter of Edward H. and Kathryn (Seitz) Fischer. She grew up and attended school in Johnson Creek where she graduated from high school. Following graduation she worked at the Jefferson County Court House.

Florence met Henry Stephan, a handsome young Johnson Creek High School teacher while both attended church services. They were married Aug. 18, 1942 at Mary Magdalen Catholic Church, and raised four children. After Henry’s death in 1981, Florence provided strength and encouragement for the family. Gracious and humble, Florence did her best work behind the scenes, praying and promoting family values and traditions.

In Albert Lea Florence was active at St. Theodore’s Catholic Church, president of the CCW, first president of the 4th degree K of C Auxiliary, which she was instrumental in organizing, headed the church sewing group “I can’t sew” and for nine years managed the St. Theodore’s Antique Show. When the Rev. Russell needed help in the kitchen to host priests and educators, Florence responded with fantastic meals.

Due to declining health, Florence lived her final two years at St. John’s Lutheran Community where the staff became her second family.