Forever fitness: G-E coach can be found on the court, diamond and field 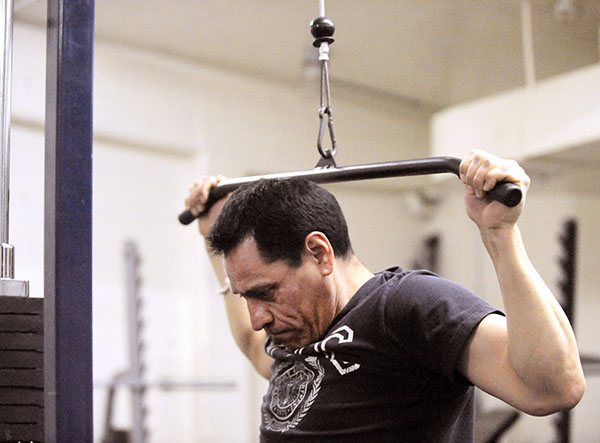 From the gridiron to the court to the weight room, Jeff Jimenez fuels his passion for athletics.

Jimenez is the defensive coordinator for the Albert Lea Grizzlies football team, the assistant boys’ basketball coach at Glenville-Emmons, an umpire, a referee and a personal trainer.

“Everyone has a purpose in life, and I know what mine is,” he said. “I like it that way. It’s all working out.” 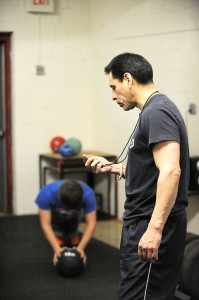 Jimenez, 49, is an Albert Lea High School graduate, and he absorbed knowledge from his coaches while

participating in football, basketball and track.

“I was real fortunate. I played basketball for Orrie Jirele,” he said. “A lot of what you see in me as a coach really comes from him — watching how he coached and how he made everyone aware of how to play the game the right way.”

Along with fundamentals and game strategy, Jimenez said he learned how vital role players are to a team’s success.

“You have to understand that not everybody’s going to be the man,” he said. “But in order for the man to be the man, it takes a surrounding cast.”

When Jimenez played for Jirele, he was part of that cast.

“I was the guy who came in and got all the garbage — picked up all the loose balls, and I think I averaged more fouls than points,” he said. “I liked my role because in the end our team was really successful.”

“Especially from Kreuscher at a young age, I learned so much from him in two years,” Jimenez said. “I have the utmost respect for both of those guys.” 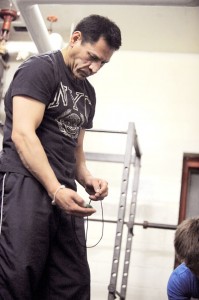 After spending 2006 to 2011 in a variety of roles on the staff of the Albert Lea boys’ basketball program, Jimenez was offered the assistant coach spot on the Glenville-Emmons boys’ basketball team by head coach Jared Matson last winter.

Matson and Jimenez knew each other previously because Jimenez coached Matson his senior year at ALHS.

“Jeff was always good at getting the best out of his teams,” Matson said. “I always loved playing for him because you knew that if you worked hard for him, he wasn’t going to quit on you.”

The Wolverines improved on year No. 1 of Matson’s tenure — a 6-22 overall record — by winning three of their first four games and finishing 7-22 with Jimenez as an assistant in year No. 2.

Jimenez said the coaching staff is committed to getting Glenville-Emmons back on the winning track.

“I know that they’ve been successful in the past, and we want to get them back there,” he said. “It all starts in the weight room.”

“I just love the passion and energy Jeff brings to our program,” he said. “When he commits to something, he’s 100 percent in.”

Basketball season ended, but Jimenez is busy again. This time, on a football field. For the second straight season, he’s leading the Albert Lea Grizzlies’ defensive unit along with head coach Stephen Piper. The duo also coached the Albert Lea junior high football team together. The players are bigger, faster and stronger, but the game is the same.

Along with coaching basketball and football, Jimenez is a personal trainer. He has worked with Albert Lea girls’ swimmer Lindsey Horejsi and helped her win back-to-back state titles in the 100-yard breaststroke and a state championship in the 200-yard individual medley. A month after the state meet, Horejsi broke the national record in the 15- and 16-year old age group for the 100-yard breaststroke that stood for 13 years.

“Lindsey is proof positive that if you have some type of training regiment, you’re going to become better,” Jimenez said.

In his free time, Jimenez said he enjoys spending time with his three daughters Jalen, 19, Riley, 14, and Quincy, 9, and cycling when weather permits.

“Usually, during the summer you’ll see me out everyday doing about 10 to 12 miles,” he said. “For me, it’s an escape to get away and think. It’s very therapeutic for me.”