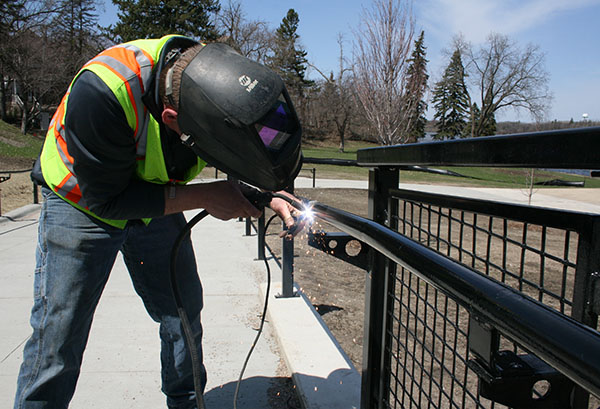 A contractor with White Oak Metals welds a piece of the new railing at Fountain Lake Park Tuesday afternoon. Work at the park is expected to be completed in June. – Sarah Stultz/Albert Lea Tribune

Work is continuing at Albert Lea’s Fountain Lake Park and is expected to be finished in June, according to city officials.

The park is the final piece of the more than $4.5 million Broadway reconstruction project that began last year. The cost of the park portion was about $400,000, said City Engineer Steven Jahnke.

“My personal opinion is that I think it’s looking really nice,” Jahnke said. 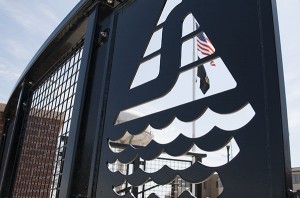 The American flag can be seen through the Albert Lea logo at the top of Fountain Lake Park Tuesday afternoon. – Sarah Stultz/Albert Lea Tribune

The park, located at the north end of Broadway, has been transformed to include a grand staircase and a handicapped ramp leading from Fountain Street into the park.

The ramp is not as steep as the former sidewalk and includes railings on both sides. Contractors are still completing the railings, which include Albert Lea’s logo, he said.

The staircase, which is the feature of the park, will double as seating for concerts or other events held in the area, including the Fourth of July fireworks.

Jahnke said the rain garden on the west side of the park will be completed by late May or early June. The purpose of the garden is to collect water coming down Broadway from Clark Street north. Native grasses, flowers and other wetland plants will be planted in the garden, which will also soak up the water. 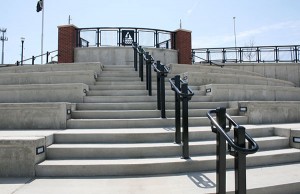 Fountain Lake Park now features a grand staircase that can be used for various events such as the Fourth of July. – Sarah Stultz/Albert Lea Tribune

To the west of the rain garden, a sidewalk is in place to let people walk down to the shoreline of Fountain Lake. At the end of the sidewalk, a 64-foot-long T-shaped dock will be installed by the end of June.

Jahnke estimated about eight to 10 boats could fit around the dock. People will be able to park their boat and then walk out to the park or to downtown Albert Lea.

Contractors also still need to plant several other native plants, shrubs and flowers and install lights at the top of the grand staircase.

Jahnke said some other community members have applied for a grant to commission a sculpture at the top of the park.

The gazebo at Fountain Lake Park will continue to be rented out through the Albert Lea Parks and Recreation Department.