Freeborn woman has made ceramic dolls of all the first ladies 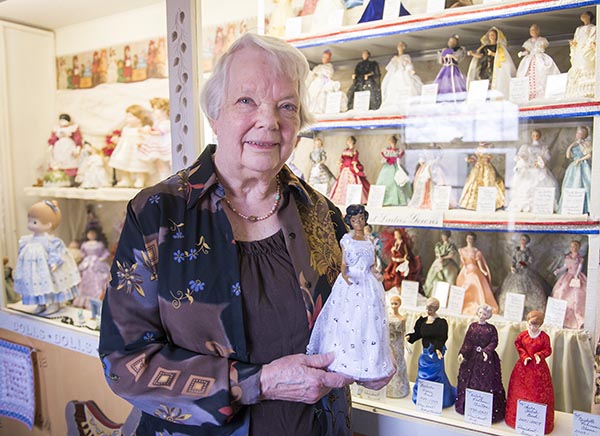 Elaine Ausen Seath holds her most recent doll, first lady Michelle Obama, in front of her display case inside of her Freeborn home. Seath has made dolls of every first lady that’s attended an inauguration, a 40-year-long project that she just recently finished in February. – Colleen Harrison/Albert Lea Tribune

FREEBORN — Over 40 years-worth of Elaine Ausen Seath’s life sits in a display case near the front entrance of her home.

Seath’s been making dolls of each of the first ladies in their inaugural gowns since the 1970s. 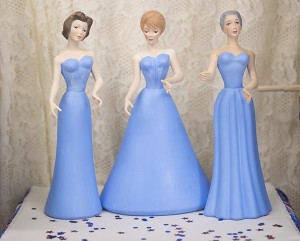 Seath casts, molds and fires each of the ceramic dolls before painting and airbrushing their face details and sewing their gowns. – Colleen Harrison/Albert Lea Tribune

She makes just about every part of the dolls herself, from firing the clay they’re made out of  to airbrushing their faces to sewing their clothes. As of February, she is up-to-date with all of the ladies through Michelle Obama, with one exception. There’s no Elizabeth Ford in Seath’s collection. President Gerald Ford didn’t have the conventional inauguration as he was sworn in after President Richard Nixon’s resignation.

Seath first became interested in ceramic doll-making through a community education pottery program that she took in the ’70s. After making a few large dolls, she started on her first lady project. She’s been sewing all her life and even sewed her own wedding dress.

The accessories and embellishments for the dolls’ outfits are bought in thrift shops, while Seath usually makes trips to Mankato for most of the fabric. The slip clay is fired in a kiln in her own home. She’s been able to track down most of the dress patterns from old doll books, while newer ones she’s been able to find online. 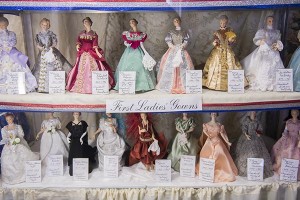 Elaine Ausen Seath of Freeborn has been making dolls of all the first ladies in their inauguration gowns for the past 40 years, with the exception of first lady Elizabeth Ford. President Ford did not have a formally-scheduled inauguration since he took office due to President Nixon’s resignation. – Colleen Harrison/Albert Lea Tribune

When asked if she had a favorite doll that she’s constructed, Seath couldn’t pick just one. She does, however, take a special interest in the dolls representing first ladies from her lifetime. The gowns she remembers seeing in her younger years especially resonate. “ I lived this. I remember seeing it,” she says.

She had a much easier time naming dolls whose detail work were the most difficult for her. Lucy Hayes’ and Nancy Reagan’s gowns both have ornate beading that Seath individually sewed on herself. Martha Johnson Patterson’s gown has 19 tassels on it that she made by winding the string around a fork. She was President Andrew Johnson’s daughter, as his wife was too sick to attend the inauguration. Mary Lincoln has flowers in her hair. Some have hair accessories, some have extensive jewelry, others have butterflies.

“It’s been a lot more work than I thought it’d be, but I’ve enjoyed it,” she said. “It’s been more challenging. … It’s been interesting though. Challenging but interesting. The details become so much more once you’ve done them yourself, instead of just looking at them.”

A Freeborn native, Seath said she took up more of her crafting since she became a widow 20 years ago. She anonymously sews blankets for infants that don’t make it home from the hospital and is a member of three quilting circles that donate to veterans and needy families.

She plans to continue the project as more first ladies move into the White House and has thought of the possibility that she may be creating a first gentleman doll in the not-so-distant future. If that’s the case, Seath looks forward to looking up suit patterns for the first time.