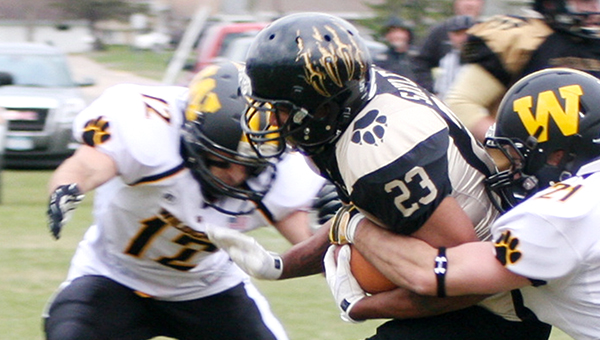 Lamar Sayles, a running back for the Albert Lea Grizzlies, rushes Saturday against the Buffalo Ridge Wildcats at Lake Benton. Sayles had 23 carries for 209 yards and a touchdown. He also had an 85-yard scoring run called back because of an excessive celebration penalty. — Submitted

The Albert Lea Grizzlies found the end zone twice in the first half, and that was all the scoring needed to win their season opener 14-6 Saturday against the Buffalo Ridge Wildcats at Lake Benton, according to a press release.

Wind gusts of up to 35 mph made game conditions challenging. It made both teams one dimensional. The passing attack wasn’t a huge factor for either team.

The Grizzlies struck first with 3 minutes, 16 seconds left in the first quarter on a pass from Tony Tolbers to Marquis Shaw. The toss was set up by Albert Lea’s defense. Nose tackle Chris Hable stripped the ball and Kaelyn Kohts recovered the fumble. The two-point conversion was no good.

After both teams threw interceptions in the second quarter, the Wildcats threatened inside the Grizzlies’ 10-yard line. However, Albert Lea’s Greg Falls forced a fumble that was recovered by Anthony Ingram to stop the drive. The Grizzlies powered their way down the field behind fullback Spencer Niehbur and running back Lamar Sayles. Sayles capped the drive with a 5-yard touchdown run. Niebuhr punched the ball into the end zone for the two-point play, and Albert Lea’s lead expanded to 14-0.

The third and fourth quarters were a defensive showcase by both teams. With 4:31 left in the game, Wildcats quarterback Bret Delany salvaged a broken play to throw a 43-yard scoring strike. Albert Lea countered with an 85-yard touchdown run by Sayles that was called back for excessive celebration. However, the penalty should have been assessed on the kickoff.

Next, Albert Lea (1-0 overall) will host the Steele County Warriors at 5 p.m. Saturday at Grizzly Field at Frank Hall Park.