Hayward man pleads no contest to charges of abusing children 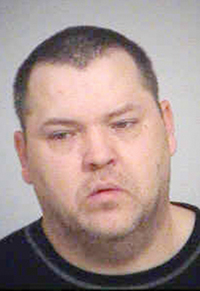 Dean Allan Thordor, 39, entered an Alford plea to a felony domestic assault charge stemming from April 2012. An Alford plea is a form of a no-contest plea. It is when a defendant maintains his or her innocence but admits there is enough evidence to convict.

According to the court complaint, the girls’ mother said the children don’t like Thordor and they often cry when they are alone with him. The 4-year-old has said that Thordor hits both she and her sister, as well.

A doctor’s review of the 17-month-old revealed many bruises and scratches, including on the forehead and face and abdomen — too many for normal circumstances, according to the complaint. The doctor also found bruises on the 4-year-old’s behind and on her ear, as well as on her arm, chin, chest, shoulder and scratches on her back. The doctor said the bruises around the ear are consistent with hard hitting or hair pulling, according to the complaint.

Thordor was sentenced to 30 days in jail last year for fifth-degree assault over a September 2012 incident where he struck a man with a chain several times in the face. Charges in another case involving terroristic threats, felony domestic assault by strangulation and gross misdemeanor charges for domestic assault, were dismissed as part of the agreement.

Thordor was also stabbed in a July 2011 incident by Isaiah Kalub Newberry, who was eventually sentenced to more than 11 years.

According to a court complaint, the stabbing happened near the bridge on 43rd St. NW in Austin. Witnesses told police Thordor and Newberry walked out of sight behind Newberry’s truck and seconds later Thordor began yelling that he had been stabbed. Newberry reportedly fled the scene on foot, leaving his truck behind.

Thordor has been previously convicted of terroristic threats in February 2011 and of third-degree assault in November 2002. He is scheduled to be sentenced on June 6.