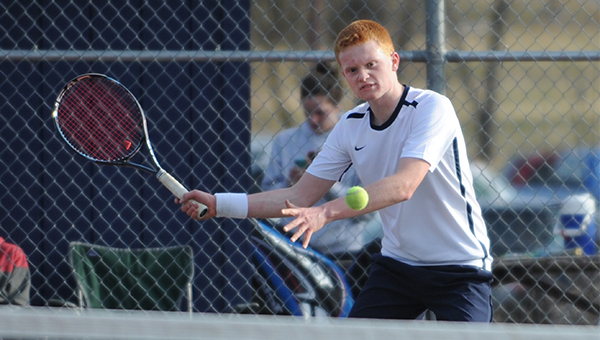 Taylor Herfindahl of Albert Lea swings at the ball during the No. 1 singles match Tuesday against Owatonna at Albert Lea. Herfindahl won, but Albert Lea lost 4-3. — Micah Bader/Albert Lea Tribune

Wins at No. 1 singles and No. 1 doubles weren’t enough to push the Albert Lea boys’ tennis team past Owatonna Tuesday at home.

The Huskies slipped past the Tigers, 4-3.

“We gave Owatonna a really good match today,” said Albert Lea coach Tom Dyrdal. “This was the best match we’ve had with them in a few years.”

Taylor Herfindahl led the Tigers with a 6-4, 4-6, 6-3 win at No. 1 singles. Herfindahl moved up from No. 2 singles last year to No. 1 this year. He said he feels comfortable as a sophomore in the top spot.

“(I was) getting top spin on the first serve, getting it in deep and attacking with the short ball,” he said.

“Taylor did a nice job of keeping the ball in play, being safe when he had to and attacking when he had the opportunity,” he said.

Cole Keyeski moved from No. 4 singles last season to No. 2 this year. He tested his Owatonna opponent but lost 3-6, 2-6.

In doubles action, the Tigers earned wins at the No. 1 and No. 2 spots.

Carter Dahl played No. 1 doubles last season with departed senior Kyle Zogg. This year, he’s paired with Collin Jahnke — who played No. 2 doubles last year — and the duo has yet to lose through four matches this year.

“We couldn’t have asked to have it any better so far,” Dahl said.

At No. 2 doubles, Garrett Matz and Foster Otten won with a 7-6, 6-1 score. Matz — who is also the goalie on the Albert Lea boys’ hockey team — was sidelined all of last season with an injury, but he’s back at full strength this year.

“Matz and Otten played well together and look like they can be a solid No. 2 doubles team for us,” Dyrdal said.

Next, Albert Lea will play at 4:30 p.m. Thursday at Faribault.