Funeral services for John C. Nelson, 84, of Alden will be at 10:30 a.m. Thursday at Redeemer Lutheran Church in Alden. The Rev. Greg Ofsdahl will officiate. Interment will be at Alden cemetery. 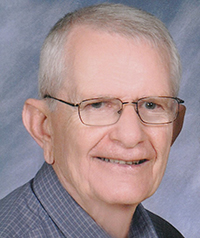 Visitation will be from 4 to 6 p.m. Wednesday at Bayview/Freeborn Funeral Home. Online condolences are welcome at: www.bayviewfuneral.com.

John Clair Nelson was born in Depew, Iowa, to Theodore and Mamie (Jacobson) Nelson on July 2, 1929, and graduated from Emmetsburg High School in 1947. John went on to earn his bachelor of science degree in agriculture education from Iowa State University and later his master of science degree at the University of Minnesota in vocational education and animal science.

John first taught in Palmer, Iowa, from 1954 to 1958. While teaching in Palmer, he met Colleen M. Vogel and the couple were united in marriage on June 8, 1957. In 1958, they moved to Alden where John taught agriculture and adult farm management. He created and maintained an active FFA program for 29 years in the Alden school district, including the creation of the Kiddies Barnyard at the Freeborn County Fair. John was an active member of the Alden Lions and Redeemer Lutheran Church and an avid outdoorsman who enjoyed hunting, fishing, golfing and spending summers at the cabin with his family.

John was preceded in death by his parents; mother and father-in-law; brother-in-law, Paul Fjare, and his brother, T. Milton Nelson.