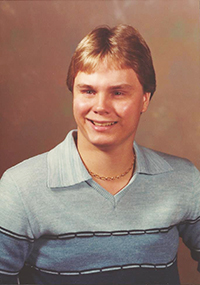 He was born Dec. 27, 1961, in Albert Lea and was raised in the loving home of his parents, George and Dorothy Boettcher of Albert Lea. Kevin graduated from Albert Lea High School in 1980.

In 1977, Kevin suffered a gymnastics accident that left him a quadriplegic. He went on to graduate from Augsburg College in 1984 and received the doctor of jurisprudence degree from the University of Minnesota School of Law in 1987. Kevin worked for West Publishing in St. Paul for 22 years.

He married Cheryl Eikenberry in 1985 and they raised two sons, Travis and Tyler, in their home in Eagan.

Kevin was preceded in death by his father, George. He is survived by his wife, Cheryl; sons Travis (Kristen) and Tyler; mother, Dorothy; sister, Georgia (John) and brother, Dana (Joan).

A memorial service will be at 11 a.m. Friday at Sojourners Church, 1679 W. Main St. on the south end of Skyline Plaza in Albert Lea. A luncheon will follow the service. All those wanting to remember Kevin’s life and offer condolences to the family are welcome.