Knife in locker spurs outcry at USC over school discipline

WELLS — The family of a United South Central student and others in the Wells community are asking questions after what they describe as an “honest mistake” last week at the school. 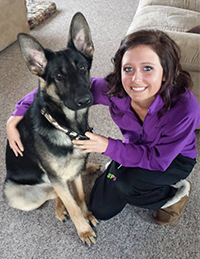 Her father, Rick Drescher, said he bought the knife for his daughter a few months earlier at Menard’s. The knife was in her purse after a day of cutting hay bales at her boyfriend’s home a few days prior, and Alyssa forgot to take it out, Rick said.

Wells Police Chief Jim Ratelle said police are called to the school two to three times a year with a police dog from Mapleton to sniff for drugs. The school is placed on lockdown during the search.

Ratelle declined to discuss anything else that happened that day other than to say the dog did not find any drugs. Wells Superintendent Jerry Jensen could not be reached for comment.

Rick said Alyssa, a junior, had planned to go tanning later that afternoon during study hall in anticipation of Prom on May 3 and had lotion and perfume in her purse. He said he was told by a police officer that the dog was alerted to the perfume that was in her purse in her locker.

“The thing that is funny is that there are a lot of drugs in that school, and the dog didn’t find anything,” Rick said. “It was an absolute honest mistake that she brought the knife to school.”

The father said school officials could have given her a three- to five-day suspension, and initially said they believed that she mistakenly brought the knife to school. Now, however, Jensen is seeking to expel her for 12 months at an expulsion hearing before the USC school board at 5:30 p.m. Thursday.

“This is wrong,” Rick said. “It’s an excessive punishment. She has never had detention. She’s never been scolded. She’s as perfect of a student as you can get.”

Alyssa is on the honor roll, is on the school’s varsity volleyball team and has also played softball. Her father said she has a good work ethic.

“Last week at this time, we were making a plan of which colleges we were going to visit, and now we’re sitting here thinking she may not even be able to go to college,” Rick said.

Alyssa’s family and friends have set up a Facebook page titled “We Support Alyssa Dee,” which had more than 300 likes after the first 24 hours.

Some of her friends at school also made posters that they attempted to put up at the school in support. Others have started petitions, and some have planned a protest in front of the school before classes start on Monday.

“We feel the consequences of what happened are more severe than they need to be,” said Lisa Kibler, who is one of the organizers of the protest.

Kibler said she thinks school officials should handle cases like Alyssa’s on a case-by-case basis.

A Head Start teacher for several years, she said she does not agree with the way the school district is handling the situation.

There have been other instances of students found with knives who have also been expelled, she noted.

Kibler estimated less than a month ago another student had a knife and jokingly threatened a girl with it. Before that, at least a year ago, a student went to the Wells Gun Show, which held at the school on a weekend when classes are out. The student, she said, purchased some knives and then put them in his locker. He was later found with the knives.

“I’m really tired of the kids falling victim to too hard a punishment,” she said. “I think as a community we need to take a look at the policies and the procedures. The ones who are being punished are the ones who don’t have anything in their history to warrant this severe of a punishment.”

Some students have talked about not attending their first-hour classes to continue protesting.

“They’re willing to do that to support their friend,” Kibler said.