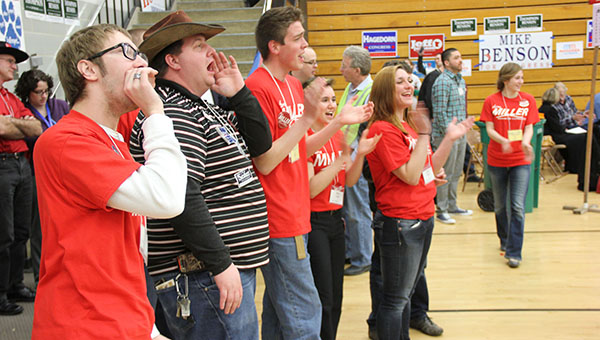 Young people cheer in favor of Aaron Miller after he tied for first place on the first round of balloting Saturday at the 1st District Republican Convention at Southwest Middle School in Albert Lea. From left are Spencer Krier, Richard Green, John Tingley, Mary Hough and Amber McCoy. — Tim Engstroml/Albert Lea Tribune

Miller, a senior account hospital manager with Revo Biologic and a command sergeant major in the Army Reserves, said being “a private-sector guy” is his leading strength heading into the general election. Secondly, he has worked in health care for 15 years and wants to see Republicans provide alternatives to Obamacare, rather than call for repeals. 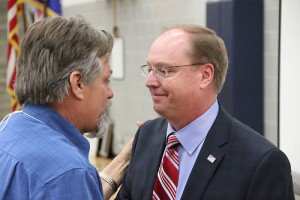 A supporter congratulates Jim Hagedorn of Blue Earth after he bows out of the race to oppose incumbent Democrat Tim Walz as U.S. representative for the 1st District of Minnesota. He actions came Saturday at the GOP district convention in Albert Lea. — Tim Engstrom/Albert Lea Tribune

“We’re happy and humble to have the support of the convention,” Miller said.

He said someone told him to send Walz, a teacher, back to the classroom.

“Let’s not. Let’s send him into retirement,” Miller said.

Miller garnered the nomination after the third ballot, when he faced off against Jim Hagedorn, a Blue Earth businessman. Mike Benson, a state representative from Rochester, dropped out after the second ballot.

Convention rules dictated that the nominee receive 60 percent. The result of the third ballot, which came at about 2 p.m, handed 56 percent to Miller and 44 percent to Hagedorn. At that point, Hagedorn stepped to the podium and asked for a motion to give Miller the nomination unanimously. A motion was made, and Jim Hahn, co-chairman of the convention, called for a rising vote. Everyone stood, and Miller was the Republican nominee. 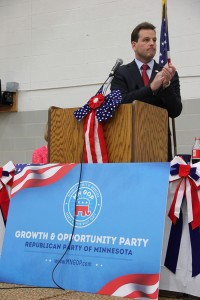 Hagedorn said when he had said he wanted to defeat Walz, he meant it, and added the Republicans needed to leave the convention united. The moves by Hagedorn and Benson were unlike two years ago in Mankato, when retired St. Peter farmer and former state Rep. Allen Quist and state Sen. Mike Parry of Waseca fought through 23 rounds of balloting over nearly 14 hours. Even then, neither candidate abided by the nomination and the battle continued to the August primary. This time, all three candidates had agreed to abide by the nomination.

The candidates spoke to the delegates prior to the voting.

Miller said America is still the land of opportunity and hopes to bring Minnesota back to prominence. He was joined by an army of young people at the convention.

Freeborn County Republican Jerrold Dettle said the movement toward youth is what earned Miller the nomination. He said he was excited about the Republican Party’s outlook going into the general election.

“Aaron Miller did a great job bringing youth to the party, and he deserves the nomination,” Dettle said.

Hagedorn told the convention that more power needs to be in the hands of the states and the people, rather than the federal government.

“We need to make changes to this country or we will lose it,” he said.

He also cautioned about federal agencies spying on the American people.

Benson said he wanted to hold Walz accountable for his support of the Affordable Care Act, cap and trade and his tax policies.

Miller’s next step? He begins a media tour on Monday. 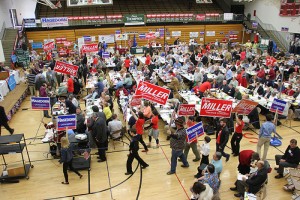 The Republicans who came to the 1st District Convention in Albert Lea on Saturday noticed a party more unified than it was two years ago in Mankato, when in-fighting among two candidates led to a sharp party divide.

At Southwest Middle School, candidates spoke of how the need to win elections trumped divisions within the party.

First District Chairwoman Carol Stevenson said having three candidates — all of whom agreed to abide by the party endorsement and “all three so equal in positions” — made a difference.

First District congressional candidate Jim Hagedorn, a Blue Earth businessman, said the party is more focused on defeating incumbent Democrat Tim Walz, a Mankato teacher, than in defeating each other.

“I feel real good about the party coming together,” Hagedorn said.

First District congressional candidate Aaron Miller, a hospital account manager from Byron, said he was excited about the atmosphere at the convention, the culmination of eight months of work for candidates and party leaders alike.

“We need to show party unity coming out of this convention,” he said. 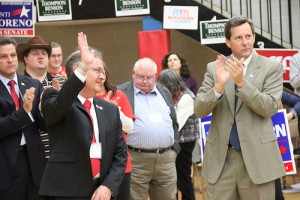 Republicans at the 1st District Republican Convention in Albert Lea on Saturday applaud state Rep. Mike Benson after he bowed out of the race for a seat in Congress.– Tim Engstrom/Albert Lea Tribune

A prime example of that was the moment after the second ballot that congressional candidate Mike Benson, a state representative from Rochester, dropped out of the race. He had been in third place on the first two ballots.

Convention co-chairman Jim Hahn told the delegates, “That was one of the classiest moves I’ve ever seen,” and called for a round of applause for Benson.

He noted the hours that Benson and Hagedorn had put in campaigning for the nomination, then they simply stepped aside for the sake of party unity.

He spoke of righting the Minnesota Republican Party’s finances, such as $200,000 saved in operations costs and $600,000 in debt repayment.

He called for bringing grace and humility in deciding party candidates and setting “a new ground game” for winning.

“Let’s have our own internal standard be higher,” Downey said.

Click here to read a statement from the DFL Party in reaction to the 1st District nomination.