Katie Nelson and Eduardo Antpack were married at 4:30 p.m. Aug. 17, 2013, at Gloria Dei Lutheran in Rochester in a double-ring ceremony. 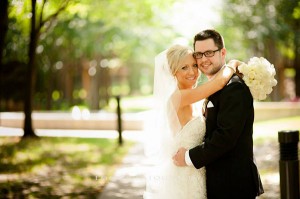 The bride is the daughter of Michele and David Nelson of Albert Lea.

The groom is the son of Maria Antpack and Eduardo Antpack of Porto Alegre, Brazil.

The couple has a son, Calvin.

The bride is a 2002 graduate of Albert Lea High School, a 2006 graduate of Winona State University and is currently working towards her master’s degree as a family nurse practitioner at Clarkson College. She is a registered nurse at Mayo Clinic.

The groom is a 1999 graduate of Colegio Maria Auxiliadora in Canoas, Brazil, and a 2005 graduate of Universidade Federal de Ciencias de Saude de Porto Alegre, Brazil. He is a general surgery resident at Mayo Clinic. He will graduate in June 2014 and begin a fellowship in surgical critical care at Mayo Clinic in Rochester.

The reception followed the ceremony at Rochester Art Center.