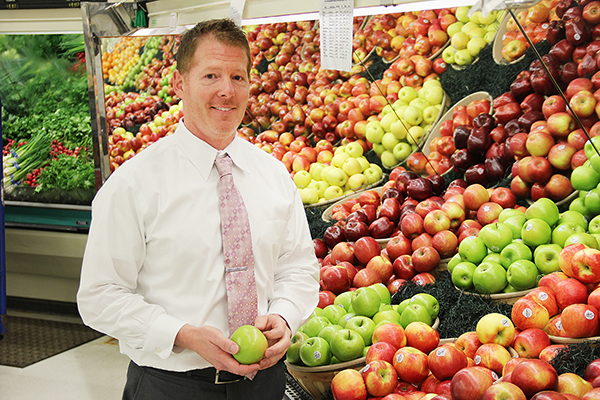 The largest grocery store in Albert Lea by square footage will close May 17.

Managers told employees about the closing Wednesday. About 80 people work at the store, 50 of them part time. Curt’s Pharmacy, which operates out of the northeast corner of the store, will remain open.

Chris Nelson, who owns the store with his cousin, Jay, said Nelson’s Shell in downtown Albert Lea will remain open, too. It and the strip mall northeast of the gas station are owned by Jerry and Jim Nelson, fathers of Chris and Jay. Chris and Jay own the grocery store, while Jerry and Jim own the building it is in. 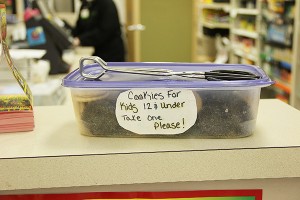 A sign on a container near the door of Nelson’s Market Place informs adults that children 12 and under may have a free cookie. Often, children remind their parents of the opportunity to eat a cookie. – Tim Engstrom/Albert Lea Tribune

Chris Nelson cited decreasing sales as the reason for closing. He said it is too large of a store to compete with Hy-Vee and Walmart. Nelson’s Market Place occupies 55,000 square feet, which he said is larger than Hy-Vee and larger than the grocery section of Walmart.

“I am disappointed and sad about the loss of a hometown grocer and the effect it will have on our employees,” Nelson said. “We are a big family. It’s disappointing.”

He has solicited buyers for the store but received no offers, he said. The Nelson’s Market Place in Faribault sold to grocery chain Fairway in spring 2012.

The closing will bring an end to longtime source of groceries and household goods for Albert Leans. Nelson’s opened in 1982 in downtown Albert Lea after Jim and Jerry Nelson purchased the former Boyd & Jack’s grocery store, where Nelson’s Shell is now at 116 Bridge Avenue.

Jerry and Jim purchased in 1995 from J.C. Penney Co., and Nelson’s County Market opened, while the downtown location was transformed into a Shell gas station with a convenience store and a Taco Bell. It is between two of the busiest streets in the city — Bridge Avenue and East Main Street.

The grocery store was sold three years later to Fleming Companies Inc., which operated the chain of Rainbow Foods. Fleming put Rainbow Foods up for sale in 2002 and closed several others in 2003, including the Albert Lea store, before the chain was sold. The existing Rainbow Foods found mainly in the Twin Cities are owned by Roundy’s Supermarkets Inc.

Jay, who resides in Albert Lea, and Chris, of Faribault, opened Nelson’s County Market that fall, and it has been in operation since. The store changed its name to Nelson’s Market Place in November 2009.

Chris Nelson said no new fuel rewards will be accrued after Tuesday; however, customers can redeem all their fuel cards through May 1. Gift cards must be redeemed by May 11.

The store plans to reduce inventory to 10 percent off for a week starting Wednesday, not counting tobacco, lottery, Western Union or money orders.

The store hours will change Wednesday to 7 a.m. until 7 p.m. daily. Grocery and bakery delivery no longer will be available after Wednesday. 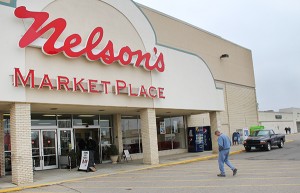 The store offered sleigh rides in the parking lot during the Christmas shopping season. It sponsored many youth sports teams and donated to many local causes.

Nelson estimated the store made about on average three donations a day.

Nelson said he and his cousin don’t have plans for what they will do next in their careers. He said they will wait and see.