NRHEG guard is boys’ basketball Player of the Year 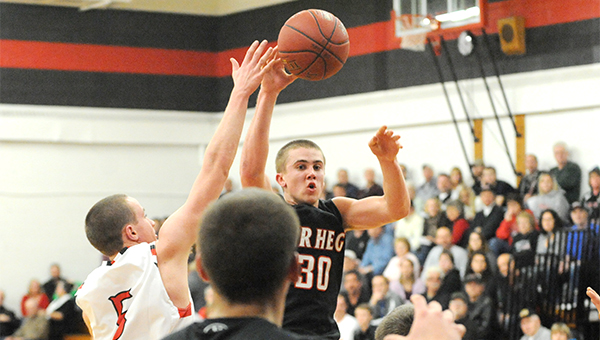 NRHEG’s Spencer Tollefson, the Tribune’s 2013-14 boys’ basketball Player of the Year, dishes the ball to Kevin Kalis on the block on Jan. 13 against St. Clair. Tollefson led the Panthers to a 19-7 record, their most wins since 2009-10. — Drew Claussen/Albert Lea Tribune

Opponents had a rough time this season guarding NRHEG’s Spencer Tollefson on the hardwood.

The junior guard lit up the stat sheet. He led the Tribune’s seven-team coverage area in scoring and was 10th in rebounding, second in assists and tied for seventh in steals.

“He can score, pass, defend and rebound all at a good level,” said NRHEG coach Pat Churchill. “Spencer has worked extremely hard at becoming a complete player. There aren’t many players I’ve coached who have committed themselves to the sport like Spencer.”

Tollefson was a vital part of NRHEG’s turnaround in the win column. The Panthers flipped last year’s 6-19 record into a 19-7 mark this season.

“It helped that we had a lot of guys coming back this year,” Tollefson said. “Our defense was better. Everything was just a lot better.”

Tollefson’s offensive production shot up in three of four statistical categories since last year. His scoring went up 2.2 points per game to 16.4, assists went up 1.5 per game, steals went up 0.3 per game and his rebounding stayed the same at 5.9 boards per game.

He gave Churchill the credit for putting him in an environment where he can thrive.

“This year, he opened up the offense, and we ran more of a freelance offense,” Tollefson said. “It wasn’t so structured. You can do whatever you want. I just like to play basketball.”

“I’ve had a ball in my hands ever since I was little,” Tollefson said.

Basketball was in the blood. Tollefson’s father, Mark, played prep basketball for New Richland High School, and his brother, Carter, helped him develop his game.

Churchill took notice of Tollefson’s talent early in his career.

“I’ve been Spencer’s direct coach on varsity for the past two seasons, but I’ve been involved in the basketball program the last seven years, and I was able to watch him come through the elementary and junior high program.”

Tollefson made the varsity team his freshman year. He started as a sophomore and was the only non-senior selected to the Tribune’s five-player All-Area First Team last year.

Basketball is Tollefson’s favorite sport, but he can also be found on the gridiron and track. Last fall, he was a Gopher All-Conference honorable mention selection as a receiver and linebacker. Tollefson was second on the team with 10 receptions for 99 yards and two touchdowns.

This spring, he’s out for track.

“I joined to stay in shape for spring and summer basketball and to try something new,” Tollefson said.

He will compete in the high jump and three relays.

Next year, NRHEG will be a conference and perhaps section favorite. The Panthers return the top two scorers in the area — Tollefson and freshman guard Oakley Baker — along with junior guard Trevor Tracy and junior forward Kevin Kalis. All four players averaged more than 12 points per game.

“We feel we have a team that can compete with a lot of teams, but we realize we still have some work to do to get to where we want to go,” Churchill said.

The bar has been raised after the Panthers won a postseason game for the first time since 2010, when they beat Medford 65-30 on Feb. 25.

“I think all of our guys are excited,” Tollefson said. “Our goal is to win the section next year. We need to work hard this summer and do what we can to reach that goal.”

Players of the Year