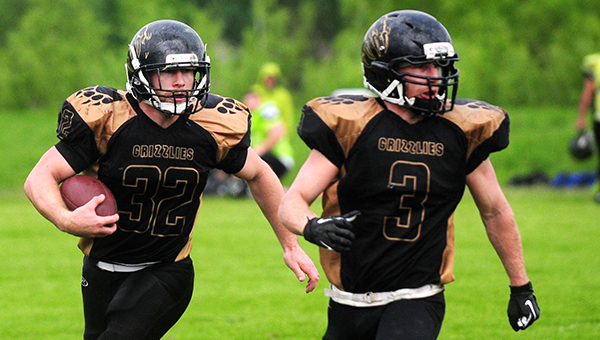 George Gerdes of the Albert Lea Grizzlies carries the ball last season against the Minnesota River Valley Shock, while Jason Kuipers prepares to block. Gerdes played fullback last year and finished with 78 yards and three touchdowns on 18 carries. He will be the Grizzlies’ offensive coordinator this year. Kuipers returns after leading the team in rushing. — Micah Bader/Albert Lea Tribune

With a mix of returning core players and 18 rookies, the Albert Lea Grizzlies football team plans to dive deep into the postseason.

“With the guys we’ve picked up, 75 percent of our second-stringers would start on other teams in the league,” he said. “We’ve got some solid depth this year.”

“We’ve added a lot of weapons,” said Albert Lea offensive lineman Craig Schmidt. “We’ve got a lot of speed and a lot of talent.”

“He’s a local kid, and he’s coming on really strong for us,” Piper said. “The weight room made all the difference for him.”

Solie is one of 10 players on the Grizzlies’ roster who listed Albert Lea as their hometown.

The Grizzlies will be led by quarterback Tony Tolbers, who has been with the team since its inception five years ago. Tolbers led Albert Lea last season with 1,161 passing yards, 13 touchdowns and nine interceptions. He also rushed for 209 yards and six touchdowns on 52 carries.

In the backfield, the Grizzlies return five-year veteran Jason Kuipers. Last season, Kuipers led Albert Lea with 655 yards and four touchdowns on 141 carries. He was a receiving threat out of the backfield as well with 13 catches for 239 yards and two touchdowns.

At offensive coordinator, Albert Lea has a familiar face: George Gerdes. Last season, Gerdes played fullback. He was third on the team in total rushing yardage. He found the end zone six times: three times as a receiver, and three times on the ground. Gerdes has been working hard with the offensive unit, Piper said.

“He (Gerdes) took what we ran last year and tweaked it to make it his own,” Piper said. “He adapted it to fit the personnel.”

On the other side of the ball, Albert Lea returns defensive coordinator Jeff Jimenez and two key defenders: Trevor Haugh and Anthony Ingram.

Last season, Haugh led Albert Lea with 45 tackles to go with one sack and two interceptions. Ingram was the Grizzlies’ big-play producer. He led the team with 11 sacks and three tackles for loss.

“I feel really comfortable with how we’re playing,” Piper said. “J.J.’s got the defense going well.”

During the offseason, the football field southwest of the Albert Lea city pool at Frank Hall Park was renamed Grizzly Field. Albert Lea will play all of its home games at that location.

The Grizzlies play in the Southern Plains Football League. The league features nine teams with two expansion teams this season: the Southwest Huskerz from Worthington and the Midwest Rampage from Webster City, Iowa.

Despite being only half of a decade old, Albert Lea has a winning tradition. The Grizzlies have never finished with a record below .500, more than two losses during the regular season or fewer than four wins.