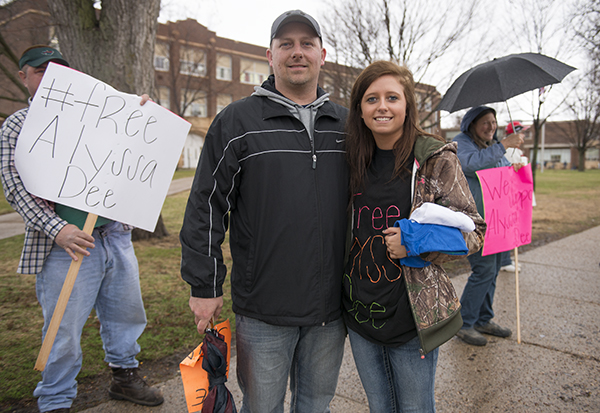 Alyssa Drescher and her father, Rick, pose for a photo Monday morning during a protest in front of USC. The protest was in support of Drescher, who is currently suspended after a pocket knife was found in ker locker during a routine check last week. Drescher’s father said it was “an honest mistake” and that she forgot it was in her bag after cutting hay bales the weekend before. – Colleen Harrison/Albert Lea Tribune

WELLS — About 50 people gathered in front of United South Central in Wells on Monday to show their support for a student who was found with a pocket knife in her purse last week at the school.

Alyssa Drescher, 17, is facing a 12-month expulsion after authorities found the knife during a random drug search April 15. A drug-sniffing dog was reportedly alerted to her locker — and ultimately her purse — from her lotion and her perfume inside. Though police did not find drugs, they found the three-inch knife in her purse.

Alyssa’s father, Rick, said the knife was in his daughter’s purse after a day of cutting hay bales at her boyfriend’s home a few days prior. She had the lotion and perfume in her purse because she was planning to go tanning later in the day.

Supporters said the incident was an “honest mistake” and are saying school officials, particularly Superintendent Jerry Jensen, are seeking to overly punish the high school junior.

“I think the punishment doesn’t fit the crime,” said Mark Kibler, who helped organize the protest with his wife, Lisa. “It shouldn’t have gotten to this level.”

Jensen, when contacted Monday afternoon, declined to comment about the specifics of the case but said the school’s policy prohibits the possession of weapons on school property. He said though each case is different, the potential consequence for having a weapon on school property is expulsion up to 12 months.

Law enforcement from the Wells Police Department, Faribault County Sheriff’s Office and the Minnesota State Patrol were on hand, though most of the time the officers were sitting in their vehicles or driving by.

The people protesting included Alyssa’s family, her friends, Wells residents and even residents from neighboring communities. Many held umbrellas as a drizzle fell from the sky.

Hart carried a Gadsden flag with the words “Don’t tread on me.” He accused school officials of acting like bullies.

“It’s time to stand up for our kids,” said Lisa Kibler. “The policy needs to change.”

Several students protesting said they planned to miss their first-hour classes to remain outside with their signs.

“We just couldn’t imagine our lives at the school without her,” said one of her friends, Alyssa Larsen.

Rick said he hopes the protest will get things changed, not only for his daughter, but others as well.

He said he heard of students being threatened with suspension if they decided to participate in the protest.

“The more the school district keeps the kids from voice their opinions, the more it’s going to upset the kids,” Rick said.

Alyssa said she was grateful for all the support she has received.

“Getting the expulsion is just way too much, and everybody I’ve talked to thinks so, too,” she said.

She will come before the USC school board on Thursday night for the expulsion hearing.

“I hope this goes good on Thursday and that they realize they went too far,” she said. “It’s about others too. It’s not just about me.”

Rick said he has also filed a complaint with the American Civil Liberties Union about the incident. 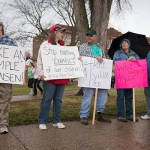 Supporters of Alyssa Drescher protest Monday morning outside of United South Central in Wells. Drescher, a junior at the high school, is currently suspended pending an expulsion after a pocket knife was found in her locker during a routine search last week. – Colleen Harrison/Albert Lea Tribune 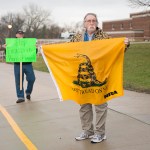 Bob Whiting, left, of Wells and Milan Hart of Albert Lea protest in support of Alyssa Drescher Monday moring in front of USC. Whiting is a friend of the Drescher family and thinks Alyssa’s punishment is “more than a little excessive.” – Colleen Harrison/Albert Lea Tribune 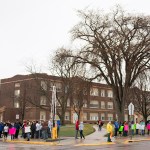 About 50 people, students and adults, showed up to protest in support of USC junior Alyssa Drescher Monday morning. Drescher should find out Thursday if she’ll be expelled for having a pocket knife in her locker. – Colleen Harrison/Albert Lea Tribune 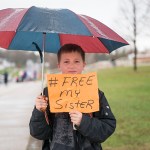 Alyssa Drescher’s 9-year-old brother, Brendan, holds a sign in support of his sister during a protest Monday morning in front of USC. The back of his sign read “Forgot to make a big sign.” “It’s funny; he forgot to make a big sign, just like Alyssa forgot to take the knife out of her bag. Simple as that,” said Alyssa and Brendan’s father, Rick. – Colleen Harrison/Albert Lea Tribune 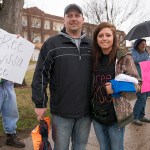 Alyssa Drescher and her father, Rick, pose for a photo Monday morning during a protest in front of USC. The protest was in support of Drescher, who is currently suspended after a pocket knife was found in ker locker during a routine check last week. Drescher’s father said it was “an honest mistake” and that she forgot it was in her bag after cutting hay bales the weekend before. – Colleen Harrison/Albert Lea Tribune