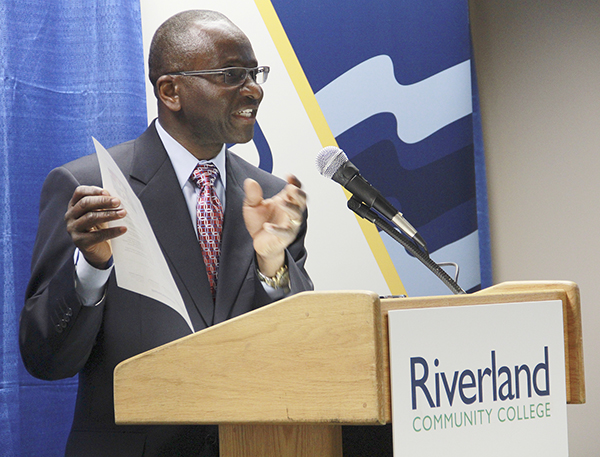 The president of Riverland Community College unveiled the institution’s strategic vision for the future Monday, a plan he hopes will help the school step out in front of the pack and be a leader in education.

“Those who are courageous enough, strong enough to stray from the pack, they achieve excellence and leave the rest of them behind,” said Riverland President Adenuga Atewologun. 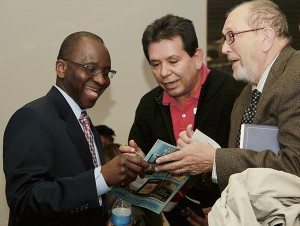 Atewologun outlined the college’s new strategic vision, titled “A Blueprint for Excellence,” during a Monday address in Riverland’s library to more than 45 people. He gave the same speech at the Albert Lea campus Monday and the Owatonna campus today.

“This is a great institution,” Atewologun said. “But it’s going to be greater.”

The plan outlines a blueprint for how the college can improve from 2015 to 2020 and a new vision statement: “Achieve best-in-class status in programs through excellence in teaching, scholarship and service.”

The statement will be presented to Minnesota State Colleges and Universities officials in May.

“It is a bold vision, but we believe we can do it,” Atewologun said.

The college will also begin stressing campus identities in each of the school’s three communities.

While most of those already line up with the current campuses, the truck-driving program will move from Austin’s west campus to Albert Lea, which could happen within the next two years.

“We can do better by making sure we offer excellent service, instruction and scholarship,” Atewologun said.

The school’s goals are broken down based on people, finance, program and market. School officials will immediately begin working on plans to improve growth and outreach into the future.

That goals are all about making sure people have access to affordable education to help them be productive citizens. College officials also plan to grow the school’s immigrant and adult populations.

School leaders started work on the plan soon after Atewologun started at the college last year as a way to improve.

To school leaders, the plan will ensure Riverland’s role as an asset to the community in training the workforce for the future.

Vice President of Academic Affairs Mary Davenport said she’s excited to look beyond what’s offered currently to emerging needs that will come up in the future. With Riverland positioned on the Interstate 90 and Interstate 35 corridors, the college is in a prime position to meet business needs.

“I think we’re just perfectly positioned for economic development, and that we can be a part of what attracts businesses into the area,” Davenport said.

More education opportunities are coming, as Riverland already offers students a path to a four-year nursing degree, with a four-year education degree coming next. School leaders are also looking at future options in agriculture, engineering and human services degrees.

Looking ahead, Riverland will kick off its 75th anniversary celebration in July. Riverland will also hold a SENCER symposium June 16 and 17, which is intended to improve science education by focusing on real work problems.

For more on Riverland’s strategic vision, go to www.riverland.edu/strategy.