Funeral services for Robert D. Severtson, 84, of Albert Lea will be at 10:30 a.m. on Thursday at Central Freeborn Lutheran Church. The Rev. Matt Griggs will officiate. Interment will be in Central Freeborn Cemetery. Visitation will be from 4 to 7 p.m. Wednesday at Bayview/Freeborn Funeral Home and one hour prior to the service at the church on Thursday. Online condolences are welcome at www.bayviewfuneral.com. 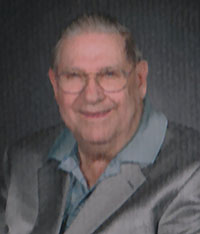 Robert Donald Severtson was born Aug. 10, 1929, in Carlston Township, the son of Robert and Edna (Anderson) Severtson. He grew up in Albert Lea and graduated from Albert Lea High School in 1947. On Aug. 20, 1950 he was united in marriage to Rita Jansen at Trinity Lutheran Church.

The couple lived in Conger from 1951 to 1999. They moved to Albert Lea in 1999, to Northwood in 2011 and returned to Albert Lea in 2013. Bob was a banker for 46 years, retiring as the president and managing officer of the State Bank of Conger. He was a member of the Minnesota Bankers, Independent Bankers and American Bankers Associations. He served as past president of the Freeborn County Banker’s Association. Bob was a member of the Alden-Conger School Board for nine years. He was a former mayor of Conger, and was a member of the Conger Commercial Club. When his three daughters were young, he was the Sunday school superintendent and a Sunday school teacher at St. Paul Lutheran in Conger. He served as treasurer for six years on the board of St. John’s Lutheran Community.

Bob was a realtor and owner of Conger Real Estate. He was an insurance agent and owner of Conger Insurance Co. He enjoyed being busy. He was an appraiser, licensed auctioneer and income tax accountant for many people. Each year during the Freeborn County Fair, Bob would purchase many championship 4-H animals. His hobbies included coin collecting, hunting and fishing. He enjoyed traveling, playing cards and spending time with his family. Dad always made time for his girls.

Bob was preceded in death by his parents and by his mother-in-law and father-in-law.