Funeral Services for Ruth “Arlene” Knaack of Glenville will be at 2 p.m. Friday at First Lutheran Church in Glenville. The Rev. James Rushton will officiate. Interment will be in Greenwood Cemetery in Glenville. Visitation will be from 5 to 7 p.m. on Thursday at Bonnerup Funeral Service in Albert Lea and one hour before the service at the church. 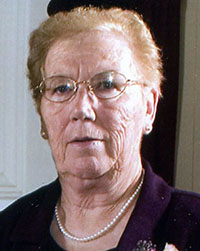 Arlene died on Monday, April 21, 2014, at Thorne Crest Retirement Community in Albert Lea. She was 81.

She graduated from Northwood High School. Following graduation she had worked at the Maid Rite shop in Lake Mills and also candled eggs in Albert Lea.

She married Richard D. Knaack on March 1, 1953, at First Lutheran Church in Glenville.

She was a member of First Lutheran Church in Glenville, where she enjoyed helping and serving at events.

Arlene and Richard raised their family and farmed in rural Glenville. She helped with chores and any other farm work as needed. She enjoyed cooking, baking, gardening, collecting dishes and dolls. You could often find her reading over one of her many cookbooks.

Arlene was preceded in death by her parents; her husband, Richard, in 1991; brothers Jerome and Duane Hauge and sister, Crystal Peterson.

Arlene was the “glue” that held us together, the family “caretaker.” She was always giving and taking care of the others, putting everyone before herself. She will be greatly missed by those who loved her.