AUSTIN — Republican Mike McFadden brought his campaign for the U.S. Senate to Austin Monday, along with a message that America can do better and that a big federal government shouldn’t be the answer to economic, health care and education issues. 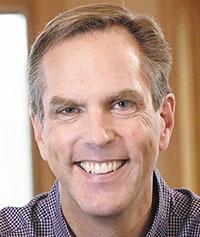 “I am running for the U.S. Senate because we can do better,” McFadden told the group.

McFadden, who is hoping to be the GOP-endorsed challenger to U.S. Sen. Al Franken this November,  painted Washington as Las Vegas-like with the government raking in funds for federal projects, but McFadden told his supporters he would not be a political insider.

“I believe the biggest issue is we’ve created a professional class of politicians,” he said. “And I think Republicans are as bad as the Democrats.”

McFadden said his party has done a good job talking about a limited but effective government, but haven’t delivered on the “effective” part.

One of the most important things, according to McFadden, is to jumpstart the stagnant economy. Without economic growth, Americans only talk about dividing the pie, he said.

“We’ve got to grow the pie, and I know how to get this economy growing,” McFadden said.

With his business background, McFadden promised to grow the economy through an approach that strips away costly, unnecessary regulations. McFadden used the PolyMet mining proposal in northern Minnesota as an example. The project, and its estimated $10 billion worth of copper, is stalled without answers in a regulatory process that has taken more than seven years and cost more than $150 million.

“I want it done in an efficient way; I want an answer,” he said.

McFadden sees energy as the answer to growing the economy and creating high-paying jobs. He wants the Keystone Pipeline approved and he’d like to fastback approvals for liquified natural gas plants.

“We’re sitting on the doorstep of an energy renaissance that allows us to be energy independent and an energy superpower, if we allow it to happen in a responsible way,” he said.

McFadden also wants more power in the hands of local leaders when it comes to education. McFadden talked about his time serving on the board of Cristo Rey Jesuit High School, an inner-city Minneapolis school serving economically disadvantaged students. To McFadden, the school is proof that the federal government is not the solution to schooling issues; local leaders are.

Most children, he said, enter Cristo Rey testing one to two grade levels before where they should be, but all seniors graduated last year and more than 70 percent went to college — and he said they do it at half the price of public schools.

“Every one of them is a doer, not a taker,” McFadden said of the students.

As for health care, McFadden said Republicans failed to address health care issues before — a mistake they need to correct.

“We need to address it now because Obamacare is not the right answer — it’s the absolute wrong answer,” McFadden said, calling Obamacare a job-killer.

McFadden said he wants to repeal Obamacare and replace it with a state-based system that utilizes the minds at the Mayo Clinic, the University of Minnesota and across the state. The federal government, he said, shouldn’t mandate what health care plans individuals buy; people should have the freedom of choice.

McFadden toured six communities across Minnesota’s First Congressional District Monday. He said his campaign has raised almost $3 million — $2.2 million in the last quarter, according to some reports. Franken has nearly $6 million in reserve for his re-election bid. Last Friday, the first-term Democrat reported raising $2.72 million for the first three months of 2014. Campaign reports from McFadden and other Republicans are due to be released this week.

McFadden is vying for the Republican nomination against GOP contenders like St. Louis County Commissioner Chris Dahlberg and state Sen. Julianne Ortman. Republicans may not settle on a nominee until an August primary.

McFadden is a native of Omaha, Neb. He and his wife, Mary Kate, live in Sunfish Lake, Minn., and have six children.