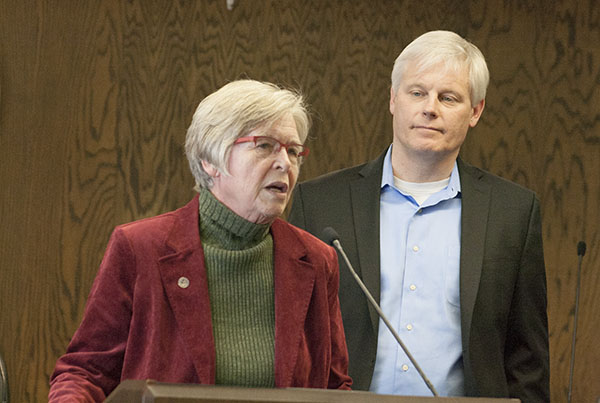 Minnesota Speaker of the House Paul Thissen said he will do what he can to make sure lawmakers approve Albert Lea’s $7.5 million bonding request to dredge Fountain Lake.

“We’re going to be very aggressive to make sure it’s included,” said Thissen, DFL-Minneapolis, who stopped in Albert Lea Tuesday afternoon for a news conference at City Hall.

The project, which is estimated to cost $15 million, calls for removing the sediment from the lake and disposing of it offsite. It has been included in the House version, and the Senate is slated to release its bill next week. 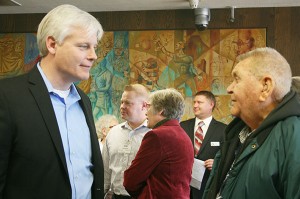 Officials have stated it is necessary because the lake has been filled with sediment — as much as 5 to 8 feet in some areas. The accumulation has resulted in water quality impairment and large algae blooms.

“We’re finally to the point where we can justify dredging Fountain Lake,” Behnke said.

The district has also contracted out for preliminary engineering.

The bonding bill was one of several issues Thissen, District 27A Rep. Shannon Savick, DFL-Wells, and other officials talked about during their brief stop in Albert Lea.

Other area projects included in the House bonding bill are $500,000 to extend the Blazing Star Trail from Myre-Big Island State Park to Hayward, potential money for upgrades to Albert Lea’s armory and money toward Albert Lea’s wastewater infrastructure fund.

Thissen said the legislative session thus far has been a productive, fast-paced session, with lawmakers passing tax relief for not only residents, but business owners as well.

“The bonding bill is one of our priorities for this session,” Savick said. “These local projects will help our local economy by putting people back to work, but they will also help preserve some crucial long-term assets for our communities.”

Gov. Mark Dayton this week also signed the new minimum wage bill into law that is expected to affect 325,000 Minnesotans, Thissen said. It will not only help people by providing  higher wages, but it will help the economy and circulate money into local businesses.

Lawmakers are on an Easter break.