Steele family reflects on tornadoes and life in the country 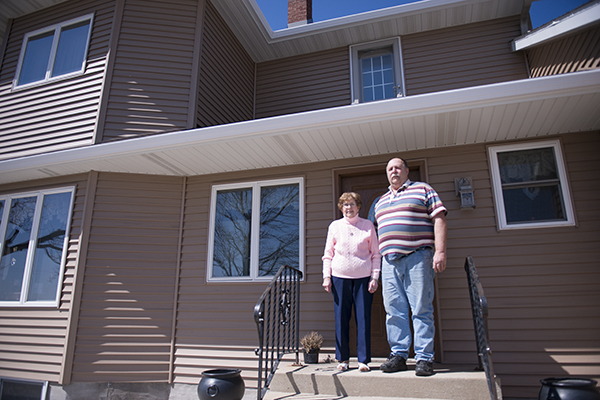 Delores Steele and her son Steve stand outside the Steele’s home on their farm in Alden. The farm is a century old, and has always been owned by a member of the Steele family. Delores lives in the house, and her sons Steve and Danny, not pictured, farm on the land. – Colleen Harrison/Albert Lea Tribune

CONGER — A century’s worth of the Steele family history revolves around their farm on 190th Street about one mile north of Conger.

The house and barn were first built in 1914. The original barn has been taken down, but the original house remains standing on the 100-plus acres of land. 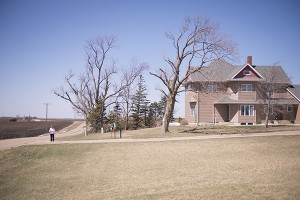 Delores Steele gathers her mail before walking back up to the house on her farm in Alden. Steele has lived in the house since she and Loren were married in 1949, and has no plans to ever move out. – Colleen Harrison/Albert Lea Tribune

Barney and Louisa Steele were the first generation of the family to live on the farm. When their son, Loren, married Delores in 1949, the newlyweds moved in with Barney and Louisa. Delores and Loren fashioned the second floor of the house into a makeshift apartment while Barney and Louisa lived on the ground floor.

Delores and Loren’s children were all born and raised on the farm.

Delores, 82, said that farming is a Steele family tradition. Her in-laws were farmers, her sons Danny and Steve currently farm corn and soybeans on the land, and she has great-grandchildren in 4-H. Her late husband “lived, ate and slept farming.” 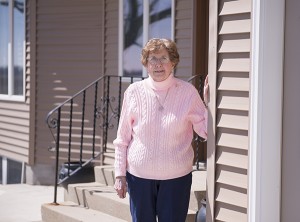 Delores Steele stands outside her home on her farm in Alden. While it sustained a lot of damage during the area tornadoes of 2010, the house has mostly kept its original structure with the exception of a few updates and a bathroom and garage addition. – Colleen Harrison/Albert Lea Tribune

“The day he got sick, he was out there driving around on the tractor looking at the crops,” said Delores. “You can’t take the farmer out of the man. … He was born here and died here. He loved everything about this place.”

In addition to the two sons, they had two daughters, Lori and Cindy. Delores has 10 grandchildren and 13 great-grandchildren, with another due this summer.

On June 17, 2010, tornadoes ripped through the area, and the Steele farm was no exception. As Loren and Delores were preparing to take shelter in their basement, the power was knocked out, leaving Loren stuck in his power-lift chair on the ground floor. Delores wasn’t able to lift him out, and wouldn’t leave his side. The couple stayed together and watched trees go flying past their living room window as winds ravaged the outside of their home.

They made it through the tornadoes, as did the structural integrity of the house, but the same couldn’t be said for the rest of their property, or for neighbors in the surrounding area. Machine sheds, grain bins, wiring, siding and entire outbuildings were completely gone or destroyed. Neighbors’ homes were completely unsalvageable. One house was even lifted off of its foundation and landed yards behind it.

“If (the house) hadn’t been built like it was, it wouldn’t have stood,” said Delores.

The Steele house is the only house on that mile, and it sits a half of a mile from the main road, or “the tar,” as Delores calls it.

She is retired and worked as a hairstylist for more than 40 years. Her hobbies are gardening and quilting. She likes living in rural Conger.

“I’m not stuck in the boonies,” said Delores. “I don’t want to move to town if I don’t have to. I hope I can always stay here.”

Delores’ wish is for the house and land to stay in the family for as long as possible. The house holds a lot of memories for her and the century-old farm is a source of family pride. It hasn’t been designated a Century Farm by the Minnesota State Fair and Minnesota Farm Bureau yet, but Delores said she plans to apply for the honor. Most of the family get-togethers are at her home, and she always hosts Christmas.

“This place has seen a lot of people, a lot of children,” she said “If these walls could talk…”