MEDINA — Minnesota Timberwolves forward Dante Cunningham was arrested Sunday for the second time in less than a week, booked for suspicion of making terrorist threats just days after being charged with felony domestic assault for an incident involving his girlfriend. 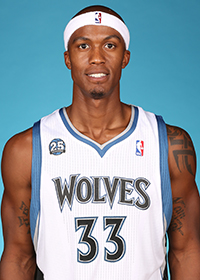 Cunningham, 26, was arrested early Thursday and charged with felony domestic assault. According to a criminal complaint filed in Hennepin County District Court, the power forward’s girlfriend told police he attacked her during an argument early that morning in his suburban Minneapolis home. The woman, who isn’t named in the complaint, told police he kicked down a locked bedroom door, grabbed her around the neck and slammed her against the wall, choking her for 15 to 20 seconds during which she could not breathe.

Police said the woman, who had been in a relationship with Cunningham for the past eight months, did not require medical treatment.

Cunningham was charged with one felony count of domestic assault by strangulation. He was released Friday and missed that night’s win over the Miami Heat, but he rejoined the Wolves in Orlando, Fla., in time to play in Saturday night’s loss to the Magic. He started, scoring 12 points in 34 minutes.

The Timberwolves issued a statement Sunday saying the team is continuing to monitor Cunningham’s “very fluid” situation. It didn’t shed light on the allegations surrounding his latest arrest, though.

“We reiterate that the Minnesota Timberwolves do not condone the behavior described in the accusations. We continue to wait for the legal process to run its course and will have further comment when appropriate.”

In his fifth year in the league, Cunningham is averaging 6.0 points and 4.0 rebounds this season. He is set to become a free agent on July 1 after completing the final year of his contract that pays him $2.1 million this season.