Carlie had another sensational season. She led the area in three statistical categories and carried NRHEG on a 61-game winning streak and a second consecutive Class AA state title. She led the area with 37.1 points, 5.3 assists 4.4 steals per game. Her scoring average is up from 33.6 points per game last season. Carlie signed her national letter of intent to play basketball at the University of Minnesota. She set three individual state records and helped NRHEG set two state records as a team this year.

Click HERE to read a story about Carlie Wagner, the Tribune’s girls’ basketball All-Area Player of the Year for the third consecutive season. 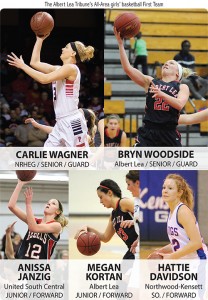 Woodside passed 1,000 career points in her final season and led the Tigers to the Section 1AAA semifinals. She was second in the the Tribune’s seven-team coverage area in three statistical categories. She averaged 19.7 points, 4.4 assists and 3.6 steals per game. Woodside signed her national letter of intent to play basketball at Jamestown College in Jamestown, N.D. Woodside played at the varsity level since eighth grade.

Janzig led USC on its deepest postseason run since 1997. The Rebels finished 19-8 overall and nearly upset Mankato Loyola in the Subsection 2A finals at Gustavus Adolphus College. The Crusaders went on to finish fourth in the state tournament. Janzig scored a team-high 14.5 points per game. It was the fourth-highest scoring average in the area. She was the area’s top player on the glass this season with 8.9 rebounds per game. Janzig averaged 1.7 steals per game and 1.3 assists per game.

The Northwood-Kensett girls’ basketball team entered the Class 1A state rankings for the first time in school history this season in large part to Davidson. As a freshman, Davidson was a Second Team All-Area selection with averages of 11.7 points per game and 9.5 rebounds per game. This year, her scoring average jumped to 16.7 points per game, and her rebounding average stayed about the same at 8.4 boards per game. Both statistics were third-most in the area. She was also seventh in the area with 2.6 assists per game.

Rehnelt was a 3-point shooting machine this year. She posted team-highs in shots made from downtown, 59, and 3-point percentage, 36 percent. Rehnelt scored 14 points against Waseca in the Section 1AAA quarterfinals to pass 1,000 career points. Her scoring average of 13.8 points per game was sixth in the area, and she was fifth in the area with 2.4 steals per game.

Schultz was a big part of NRHEG’s title run, taking some pressure off of Carlie Wagner and hitting some big shots at the state tournament. She will join Wagner at the University of Minnesota. Schultz made the area’s top 10 list in three statistical categories. She was third in the area with 4.1 assists per game, ninth in the area with 11.6 points per game and sixth in the area with 7.8 rebounds per game.

Maddie Wagner is making her first appearance on the Tribune’s All-Area list. She averaged 7.5 points, 4.4 rebounds, 2.5 assists and 2.1 steals per game. However, she made the All-Area Second team for her performance under pressure at the state championship game. She drained a 3-pointer to give NRHEG its first lead of the game, 5-4, and jump-start the Panthers’ offense. She scored eight of her nine points in the title game during the first half.

Marnie Wagner, Maddie’s twin sister, is also making her first appearance on the Tribune’s All-Area list. Her numbers were similar to Maddie’s. Marnie averaged 7.2 points, 4.7 rebounds, 2.5 assists and two steals per game. Marnie also stepped up at the state tournament by playing her role, not forcing shots and playing solid defense. She was 3 for 3 from the field and 1 for 1 from beyond the arc in the title game.

Skov led the Knights backcourt with 10.4 points per game. Her consistent defense led to 2.9 steals per game, which was fourth in the area. She also averaged 2.2 assists per game and 4.4 rebounds per game.

Orban averaged a team-high 11.3 points per game to lead a young Lake Mills girls’ basketball team. Her scoring average was 10th in the area. She also averaged two steals per game, which tied her with three other players for seventh in the area.

Despite missing some time with an injury, Bauman was a leader on the USC girls’ basketball team. Late in the second half of the Subsection 2A South finals, Bauman hit three 3-pointers to give the Rebels a chance to advance past Mankato Loyola. She averaged 8.1 points, four rebounds, 2.8 assists and 1.8 steals per game. Her assist total was fourth-most in the area.