Funeral services for Vallene E. Knutson, 79, of Albert Lea will be at 10:30 a.m. Friday at Our Savior’s Lutheran Church. The Rev. James Kassera will officiate. Interment will be at Lakewood Cemetery. Visitation will be from 4 to 7 p.m. Thursday at Bayview/Freeborn Funeral Home and one hour prior to the service at the church. Online condolences are welcome at www.bayviewfuneral.com. 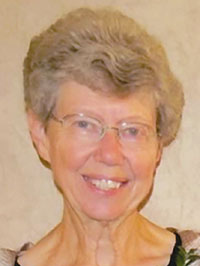 Vallene E. Knutson was born April 5, 1935, on a farm near Dexter, the daughter of Herbert and Sophie (Kietzer) Mees. Vallene grew up near Dexter and graduated from Elkton High School. After graduation, Val attended Mankato State College, earning a degree in elementary education. Val taught school in Byron for two years.

On June 8, 1957, Vallene was united in marriage to Gerald Knutson at Trinity Lutheran Church in Dexter. They made their home in Albert Lea. Val taught for one year in Alden before taking a break to raise her family. Vallene later returned to teaching and taught third- and fourth-grades at Hawthorne Elementary in Albert Lea for many years. Val earned her masters degree in education from the University of Minnesota. She retired from teaching in 1997.

She was a member of Our Savior’s Lutheran Church, where she was active in the sewing and quilting group. She donated several quilts to raffle at the annual church bazaar. Val was a member of a Red Hat group where she organized many trips. She enjoyed sewing, quilting, hardanger, gardening, baking, golfing and was an avid Minnesota Twins fan. She especially enjoyed spending time with her family and attending her grandchildren’s school and sporting events. Vallene was generous with her time and talents and believed in doing random acts of kindness. She touched many lives during her time on this earth.

Vallene was preceded in death by her parents; four grandchildren in infancy; brother, Wayne Mees; and sisters Donna Mees, in infancy, and Marian Mees.