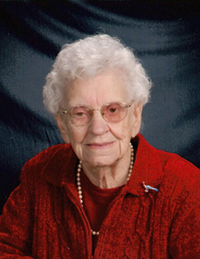 Vyra Mae Dawley was born at the family home a few miles southwest of Burr Oak, Iowa, on Dec. 14, 1914, to Charles and Cordelia (Crane) Dawley, the 11th of 12 children. She attended the Lost Nation and Coldwater Schools and was a member of the Burr Oak Clever Clover 4-H Club. After graduating from eighth-grade, she worked at home and cared for nephews and nieces when needed.

On Jan. 14, 1939, she was united in marriage to Victor Masters at Methodist Church in Decorah, Iowa. They farmed near Canton, retiring in 1967 and moving into Canton. Vyra worked at Green Lea Manor in Mabel for 19 years, and then as a home health care aid for five years. She travelled throughout the United States on tours, played cards, did crossword puzzles, quilted, and read the Bible daily.

When she was young, she attended Advent Christian Church in Burr Oak, and was a 61-year member of Canton-Scotland Presbyterian Church.

Funeral  services will be at 11 a.m. Saturday at Canton-Scotland Presbyterian Church in Canton with  the Rev. LeRoy Haynes officiating. Burial will be in Burr Oak Cemetery. Visitation will be from 9:30 to 11 a.m. Saturday at the church. Arrangements are entrusted to the Mengis Funeral Home in Mabel.